This article is about the homebrew Dwarf race. You may be looking for the SRD:Dwarf. 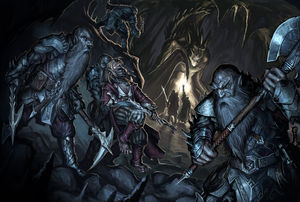 The base game gives very little incentive to play a dwarf. While possibly situationally useful, the many racial abilities of a dwarf are too situational to realistically have an impact on the game. Without the benefits of Small size or the bonus feat of a human, they are easily outclassed by other player races and left in a similarly awkward spot as elves. Since drow got shown the love, elves have gotten their fair share of homebrew fixes, but dwarves have not.

This dwarf can also be considered to cover the duergar and other dwarf sub-races, since most differences between them are cosmetic or role-play related and not of significant mechanical consequence.