Under primal sky, deep within darkest earth, the fury of the eryloth, of blood infernal.

First born of the spilled blood of lesser gods and powerful yugoloths slain upon the Material Plane, eryloths are evil incarnations of vengeance. Often looked down upon by other yugoloths for their connection to the Material Plane, eryloths serve a useful role; they're native to the Material plane and capable of replenishing their own stock to fulfill their goals. Eryloths, when allowed, attack when their targets are weakened. They wait and stalk prey until an opportunity arrises. 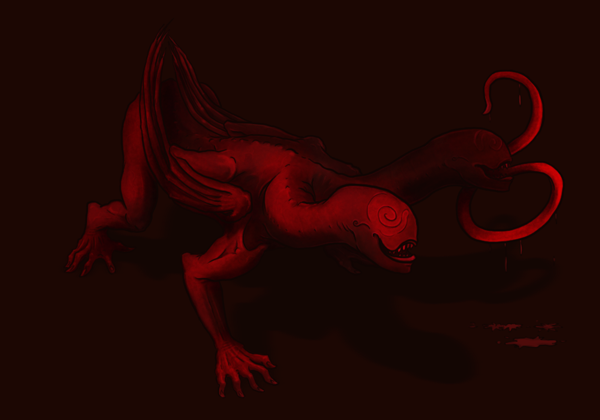 The eryloth presented here has 7 skill ranks in Bluff, Climb, Diplomacy, Disguise, Intimidate, Jump, Listen, Move Silently, Sense Motive, Spot and Survival. These skills are her class skills. She gains a +4 racial bonus on Bluff and Disguise checks. She gains +2 synergy bonuses on Disguise (to act in character), Intimidate, Sleight of Hand, Tumble and Knowledge (nature) skill checks. She gains a +4 synergy bonus on Diplomacy skill checks. She may use any of the above skills even untrained. These numbers are represented in the stat block above.

In her natural form, an eryloth appears to be a living liquid pool of blood. Often times, she may be confused for an ooze or the bloody aftermath of a battle.

She may also assume the form of a twin-headed, winged, quadrupedal beast. This form's body resembles something of a tensed, hairless, muscular burgundy tailless dog or cat with humanoid hands for feet. Her twin heads are featureless save their large mouths and sit atop long muscular serpentine necks. Despite not having apparent eyes or ears, an eryloth sees and hears just fine in any of her forms. From her back a pair of bird-like or bat-like wings sit folded tightly against her body when on the ground. When in the air, her wings unfurl and allow her to fly at great speed.

Her third form is that of a humanoid and is typically female. She may assume a male form, but all eryloths are inherently female. With a basic disguise to blend in among humanoids, she may appear as pale-skinned and athletic with smooth features and dressed in whatever clothing she found available. When not conspiring with subterfuge, eryloths traditionally employ long, straight maroon hair, dark eyes and dark lips on their emotional faces. If she assumes her humanoid form for combat, an eryloth is more likely to appear as an overly-smoothed over scowling female humanoid with ruddy skin and eyes that ooze blood. Her mouth often hangs agape from screams of fury or due to her blood tongue lashing out to ensnare foes.

Regardless of her form, an eryloth weighs about 140 pounds.

An eryloth prefers to travel in her quadrupedal beast form, slinking into her puddle form to hide on battlefields or slip into buildings. For combat, she generally employs her humanoid form.

When she dies, she melts into a blood-like pool as her natural form, often drying out and staining the area where she died with her evil taint.

Though proficient with simple and martial weapons, an eryloth prefers to fight unarmed, feinting and grappling her flat-footed opponents with her Blood Tongue. Preferably, she'd employ her blacklight sphere on either herself or her target and move in silently on her foes. When without her blacklight, she'll advance and employ combat feints as a move action to get her opponents off-guard and make attacks. If there are multiple weaker foes, she may employ her quadrupedal beast form to make two blood tongue attacks per round. If she is unable to get the drop on her opponent with a tactical advantage, gets heavily wounded or outnumbered, she'll transform into either her quadrupedal beast form to withdraw and fly away or slip into her blood pool form to ooze through cracks, taking a total defense action if necessary.

Unlike other fiends, an eryloth is incapable of magically summoning others to her aid, relying instead on her ability to draw out blood from her slain foes for backup.

Surprisingly tactical in her habits, an eryloth prefers retreat or diplomacy to mindless fury. While evil, she is not wasteful in picking her targets. If unable to close with attackers due to range or other threats, an eryloth is likely to retreat and make an attempt again later.