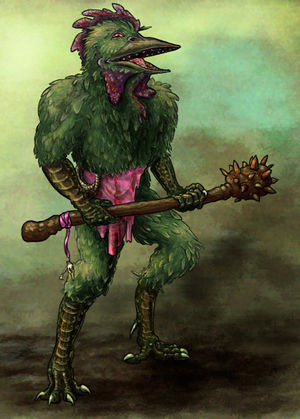 With chicken orcs, you get the ferocity and strength of an orc and the basic intellect of a chicken... wait, why would you want that?

Well, it turns out that chickens can shine with formidableness. If they couldn't, there would be a lot fewer gamblers placing wagers over cock fights.

Chicken orcs are rather dim, but they certainly aren't without survival instinct and are sociable creatures. Chicken orcs test each other for dominance and establish a pecking order. When they do, they get along with each other peaceably, though social ranks are often tested. They know that the toughest, wiliest, strongest and (occasionally) the luckiest get the best share, and they want that share. Chicken orcs squabble as part of establishing social hierarchies.

Most chicken orcs are rather skittish when spooked, but take to sudden aggressive action when pursuing goals with immediate gratification (like snatching food or shiny trinkets).

Chicken orcs are generally rather lucky as well, getting into all sorts of trouble and getting back out again without too much hassle (most of the time). Some folk attribute this natural luck to the their wishbone, a well documented source of chicken magic.

Chicken orcs stand tall at about six feet high, though their posture is slightly hunched. Males are just a bit taller than the females, though the females are noticeably stockier, averaging 180 pounds for a male and 200 pounds for a female. When empty-handed, they carry their long arms folded in and forward, rather than relaxed at their sides. Their heads bob slightly on their thick necks as they walk.

From cowl to shin, they're covered with greenish feathers, though feather color and patterning varies from tribe to tribe. Purplish coxcombs and wattles adorn the heads of males, while females have lighter, grayer combs and smaller wattles. Chicken orcs also sport beaks lined with a few small, stout and pointy teeth. Most all chicken orcs have orange eyes.

Scales cover their shins, forearms, hands and feet, often in a shade similar to their feathers, though darker. While their hands have five fingers, their feet are much too chicken-like, ending in four toes with the inner-most toe shorter and angled back for balance. Males sport a sharp spur just below their calf muscle. Their nails, capable of growing sharp and dangerous, are typically ground down and blunted from rough living.

Chicken orcs often adorn themselves with simple rags, often from scraps and discarded materials of whatever they can get their gangly fingers on. Their feathery coverings protect their bodies enough to make clothing fairly unnecessary.

Chicken orcs get along reasonably well with most peaceable humanoids of at least their size. In large numbers, other races can often establish territorial dominance, and chicken orcs respond appropriately, by not stirring up trouble.

Smaller races are often looked down upon, or possibly even pursued as food. Chicken orcs despise gnomes, for their connection to small mammals like weasels. Chicken orcs actually get along better with elves than typical orcs do. For that matter, they don't get along with orcs well at all. While similarly statured, chicken orcs are less war-like and more "dumb" than "proudly ignorant".

Because of these differences to orcs, some cultures even allow small flocks of chicken orcs to claim pieces of land in return for establishing trade. Chicken orcs offer feathers (excellent for arrows of many sizes) and eggs (which actually don't taste bad, despite the "orc" part of their heritage). Adult females lay a single egg once a week.

Less caring cultures simply enslave chicken orcs, occasionally treating them no better than livestock. Chicken orc meat, fortunately for chicken orcs, is stringy, mealy and sour. This doesn't deter them from preying on each other in harsh times, however.

Most chicken orcs are too dull to form much of an opinion about the world. While many may be thieves, this doesn't make them evil as they don't have such hard set concepts of ownership. So, as a group, they tend toward neutral alignments. Though, they are a diverse group with diverse backgrounds and may be of any alignment.

Chicken orcs gather in flocks or mobs, with a mob being a temporary large conglomeration of flocks often for redistribution of members, warring or nomadic migration. Chicken orcs have no concept of marriage or couples. Most flocks consist of a dominant adult male, a dominant adult female, subordinate females, the aged and immature chicks. During mobs, flocks generally trade members or form new flocks as young males and females reach maturity. Forming mobs also happens to be handy for unifying their culture, trading news and rumors, trading goods and finding safety in numbers. Being short-lived, mobs form once a year in most areas with enough of a population. In low population, a mob might only form once every other year. Chicken orcs in mobs are hardly coordinated, lacking any leadership while their flock is dissolved into the larger group. As such, they tend to be extra wild during mob season.

They settle in regions that can sustain their foraging and hunting habits year round while becoming fairly nomadic if nearby regions offer seasonal advantages. They may settle in forests or plains, but they often avoid the dark underground realms and mountains home to orcs.

Chicken orcs as a race, have no set religion or patron deity. Some tribes worship orcish deities, while others have no religion at all. Adventuring chicken orcs are generally potential conversions to whatever religions they are exposed to, being willing to follow the orders of more powerful beings (or at the least, not disobey them directly).

Chicken orcs speak a hearty language of squawks, grunts, chirps, chortles and warbles known as Bawkbagawk. It has no alphabet or written form. Anytime chicken orcs need to write things, it's generally at the behest of other races, and so is written in Common. Due to their low intellect, chicken orcs often write with poor penmanship, grammar and spelling.

Chicken orcs generally give their chicks Bawkbagawk names, though there is no hard-set cultural reason for this. Many chicken orcs don't even name their chicks at all, allowing them to pick names (or get named by someone else). For this, many chicken orcs have names that are more like nicknames, being comedic, derogatory, simple or just dumb.

For every point of Intelligence penalty a chicken orc has, he gains 1 Luck Point (see: Ability Modifiers). Luck Points automatically refresh at a rate of 1 per minute. A chicken orc can call upon his tremendous survival luck to avoid disaster or get the drop on any would-be antagonizers. Luck Points are usable on d20 rolls for ability checks, saving throws, skills as well as checks made in response to special actions (such as the strength-check when bull rushed or the opposed grapple check). Upon using a Luck Point, the player instead rolls 2 d20s, taking the die result of his choice. A chicken orc with a positive (or neutral) Intelligence modifier, still gains use of 1 Luck Point.