You may be looking for the SRD:Pit Fiend. This is a homebrew version.

This monster is balanced to fit in a high level of balance game. I have taken the liberty of not using the standard D&D rules for determining various statistics for this monster. As a result, it may seem a bit stronger (or weaker) than some SRD monsters of the same CR and that is fine. I think it will pose an appropriate challenge for characters of its CR. 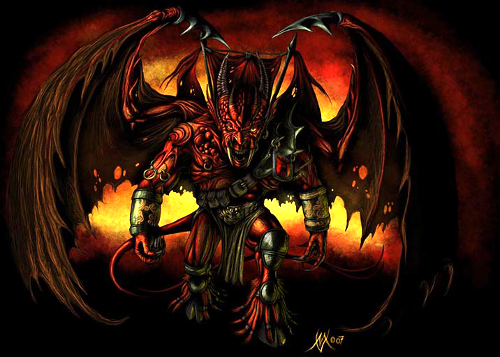 When mortals think of devils, the pit fiends are the creatures that are brought to mind. These creatures appear to be large humanoids with brilliant red skin. Their heads are adorned with massive horns while their bodies are cloaked in a pair of bat-like wings. A long, prehensile tail snakes from their backside. The mouth of a pit fiend is filled with sharpened fangs whose bite carries a virulent disease. A pit fiend stands over 12 feet tall and weighs 800 pounds.

Scholars pertain that there are sixteen standard ranks of baatezu and pit fiends are right at the top of this hierarchy.

Pit fiends are the generals of baatezu armies, the orchestrators of mass corruption and the bullies of their lesser devils. They appear as bestial, scaled humanoids twice the height of any human being with a pair of wings that it can wrap around its body. As venom drips from their fangs, fire wreathes the pit fiend's entire body.

Armed with superhuman combat prowess, the intelligence of a mighty wizard, an array of powerful abilities and usually the resources of a devilish army as well, pit fiends are incredibly dangerous foes. Powerful conjurers can summon a pit fiend to make deals. Contracts are usually written up in order to have the deal honored, but pit fiends are masters of such things and always have ways of perverting the contract to their own ends.

The next step up from pit fiend in the infernal hierarchy is the rank of duke. Only dukes are allowed to become an archdevil. The process of becoming a duke does not involve a ritual as other devilish ranks do; it just means that a pit fiend gains even more prestige.

Pit fiends are the most powerful of the infernal legions. They serve not only as the generals of Hell’s armies, but also as the lower nobility of the infernal courts. These monstrous fiends are only rivaled in power by the archdevils.

The pit fiend is a master of fear, darkness, fire, and poison: it is an unholy terror for sure. It specializes in fighting groups by means of divide and conquer.

Typically, a pit fiend will start a battle by flying into the middle of a group and launching a flurry of attacks augmented with burst of flames. It will then create an area of darkness and use that to single out a creature hopefully grappling with his tail. It will retreat when it is damaged heavily, using areas of total darkness to obscure its path and will plot means to single out party members and kill them after it has regenerated.

Just to be helpful, here is a list of abilities sorted by action type and when a pit fiend would likely want to use them: