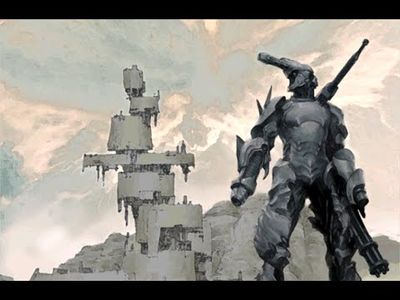 An A.D.A.M unit, with a tower in the background. Official art.

A.D.A.M.s are androids that appear to be made of trillions of networked nano-machine cells. With sufficient mass and stability, their processing power surpasses the human brain, allowing for technological marvels - and horrific capacity for murder.

A.D.A.M.s appear as featureless humanoids without hair in their unarmed state. They often adopt strange line patterns that distinguish one unit from the other among themselves, but to anyone else it appears as simply cosmetic. They are all the same height in their unarmed state, and all have the same mass requirements. Once their body begins to transform and their cells begin to replicate, height and mass can begin to vary. They can take on armor plating, weapons both mundane and futuristic, store condensed pockets of cells to rapidly regenerate, overclock systems to increase their mobility, and coolant to allow them to utilize their full power for longer periods without interruption. All these things are externally visible, and those most familiar with A.D.A.M.s can deduce their capabilities at a glance.

So long abandoned are the A.D.A.M. units that they have lost their history. What records do remain paint a grim picture of the past. It can be reasoned, through sparse footage, the A.D.A.M.'s remaining memories of the outside, and an inspection of their abilities, what must have happened to them. First, they would have been created as an experiment for beings of living metal. Their artificial intelligence would have been developed for decades with little success. As time for their human creators wore on, however, technology would advance exponentially faster. When, at last, the conditions were right, and these weapons of war were created, humans would use them on each other, devastating their world and population. The horrors born at the hands of these immortal A.D.A.M.s would plant the seeds of fear deep in the hearts of their creators - until a brilliant solution was proposed.

A.D.A.M.s would be locked away, to await the end of the world, in highly advanced facilities isolated from society. These towers would survey the androids and ensure the towers fulfilled their purposes: to trap the A.D.A.M.s in an endless cycle of combat for the entertainment of their creators. Battles would be televised around the world, bets would be made for sport on which would come out on top, and the winner would advance ever higher. It was, for the humans, an ingenious method of dealing with weapons of world-ending power.

For the A.D.A.M.s, however, it became a harrowing purgatory. Each loss resulted in meltdown, wherein their memories would be wiped and all their capabilities would reset. Each floor of the tower had a guardian whose purpose was two-fold. They served as both a buffer, to keep lesser units from advancing, and a test for greater units to overcome in their quest to reach the top. This system was in place not to be fair, but to create an everlasting prison. Hidden at the top of each tower was a controller A.I., to monitor the tower and the units within and keep them trapped there. Only these controllers knew the ultimate purpose of the towers - that they had a chance of producing something to succeed the humans that had long gone extinct during the androids' stay in these towers.

In order for a unit to be released from a tower, they would need to demonstrate the capability for self-awareness, creativity, and contemplative thought on par with a human. Eyes made only to scan for targets would need to find beauty in the sky above. Legends say only one such unit has ever existed - only one has ever managed to escape. If that is indeed true, said unit is effectively the progenitor of a new race of artificial beings that surpass all others before them. In the end, this all amounts to conjecture; what you believe is up to you.

What passes for A.D.A.M. society is brutal, incomparable, and simple. An A.D.A.M. begins life as it knows it at the base of a tower, alone. It ascends to the first floor, and its brethren make every effort to murder it. If it survives long enough, it advances to the first guardian. Most often, this guardian is not capable of any individuality, and is simply a wall to overcome. The second floor is more of the same, with little talk and much combat. The second guardian can form opinions, but they are limited to warlike thoughts. Each floor contains new weapon capsules - blueprint-like devices a unit can use to replicate specific models of weapons using their very bodies.

This continues ad infinitum until one of two things happens. The far more likely course is that the unit eventually "dies." It falls in combat among other units, dissolves into a puddle, and reawakens as a new consciousness at the base of the tower. Over hundreds, possibly even thousands, of years, a unit may finally reach the end and be set free, having become an individual in truth. What lies beyond is surely an empty world of solitude - or perhaps it is a land of magic and mystery. No matter the case, it is certain that neither the unit nor the world it will enter are prepared for one another.

Presumably, the name-scheme for A.D.A.M.s came about in response to their prescribed gladiatory nature. Each unit is named for a hero or poet, fictional or otherwise. Note that "Gram" is considered a neutral name for a unit.

Creature Type. Humanoid
Ability Score Increase. Constitution +2, Wisdom +1
Age. A.D.A.M.s emerge from their towers fully matured and have no known date of death. You are killed as normal, but the body you leave behind is mercurial rather than solid with no tower to reconstruct you.
Alignment. Due to their lengthy background relying on superior logic, units tend toward neutral alignments.
Size. All A.D.A.M. units share the same mass requirements. You are 6 feet and 6 inches tall (approx. 2 meters), and weigh 275 pounds (approx. 125 kilograms). Your size is Medium.
Speed. Your base speed is 30 feet.
Artificial. Your creature type is construct instead of humanoid. As such, spells like Cure Wounds don't affect you, and you are immune to spells like Crown of Madness or Dominate Person because they specifically target humanoids. You are immune to poison damage, disease and being poisoned. You do not need to eat, drink, or breathe, and you cannot consume sustenance the way other creatures do. Rather than sleeping, you enter an inactive state of thought for 6 hours each day. You do not dream in this state; you are fully aware of your surroundings and notice approaching enemies and other events as normal.
Weapon Of War. As a bonus action, you can transform part of your body into a replica of one weapon or tool that you are proficient with or back to your original form. As a shield is heavier, creating one out of an arm requires an action. All weapon properties apply, but you cannot create a two-handed melee weapon in this way, and a shield must be formed from one of your arms. In addition, you cannot wear armor. Your head, chest, each arm, and legs can become different things. If you have attuned a magic item on a limb, it cannot transform with this trait.
Solid Metal. Your AC is equal to 14 + your proficiency bonus, but other creatures have advantage on perception checks to detect you that involve hearing. You can decide the color of your body at will, but you cannot hide your heavy footfalls.
Integration. As an android, magic items and other types of additional gear function differently for you. When you attune to an item, it fuses with you and you cannot remove it until you spend a short rest to detach it from yourself.
Reclaimed Soul. Though you are a construct, the process of refinement in the towers has gifted you a soul that formed in response to your inner strength. If a spell or other effect specifies that it affects your soul, even if it would normally fail against a construct, you are nevertheless affected by it. Spells such as Soul Cage, or magic items such as the Ring of Mind Shielding are prime examples.
Optional: Immortal Body. When you fail three death saves, instead of dying outright, your body breaks down. You become a puddle of liquid metal. In this state, if you sustain damage equal to twice your character level, you permanently die and your soul is destroyed. If you remain for one hour, you reform, but your memories since leaving the tower are gone and any attuned items are removed. Any languages you have learned aside from those granted by this race are forgotten as well. You retain any class levels and skill proficiencies you had before dying in this way.
Languages. You can speak, read, and write Common If applicable to the setting, you can also use and understand Binary as a language. 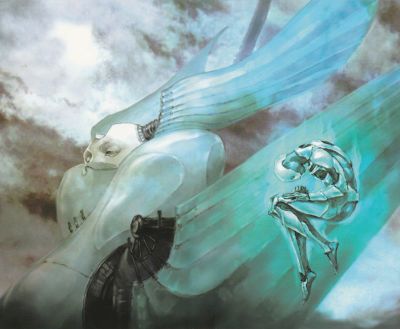 That which carried you from your tower yet lingers.

Your cells are capable of repairing you at any time, using stored materials.

You are one such android who managed to look beyond the act of combat and find purpose.

As you fought for your life, you found affinity with certain forms and weapon types.

Your isolation and the genesis of your soul are products of war. When you see something new, the artificial intelligence you share a body with will analyze it. You know when something was made for combat, or to supplement combat, even if that function would be hidden to others. A sword hidden in a cane, a knight statue that will strike passersby with its raised sword, and other seemingly harmless items betray their true purpose to your eyes. Maybe you see spots of rust on the statue's sword where blood wasn't completely cleaned up, or the soot of gunpowder in a lion's mouth that hides a cannon. Perhaps the cane seems off balance or too heavy, or you hear too many chains on the drawbridge with hidden hot-sand traps. War is what birthed you, and you mastered it to be free.

Upon your release from the tower, sections of your memory were unlocked. You remember a world long gone - perhaps a different world or universe entirely - complete with stories of it, its technologies and their components, and its history. You can always think of an interesting tale from this world, or a technology you might use as a bargaining chip - though beware introducing a rifled barrel to an unfamiliar world, or the secret of your construction to one that does not know the horror that caused you to be locked away. This wealth of knowledge can serve many unexpected purposes but without the wisdom to temper it, it may be the seed that destroys yet another civilization.

When creating an A.D.A.M. unit character, you can use the following table of traits, ideals, bonds and flaws to help flesh out your character. Use these tables in addition to or in place of your background's characteristics.