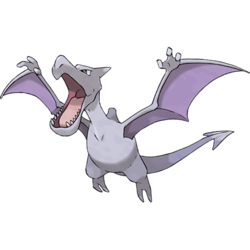 A great winged reptile screams and gnashes its serrated teeth. It's a lot like a Wyvern, if wyverns were made of living stone and anger.

For the purposes of overcoming DR, Aerodactyl's natural weapons are treated as stone.

Breath Weapon (Su): 60-foot cone, once every 1d4+1 rounds, damage 10d8 fire, Reflex DC 25 half. The save DC is Constitution-based. On a failed save, creatures are also on fire; until extinguished, they take 2d6 fire damage each round and are panicked. This is a [Dragon] effect.

Ancient Power (Su): Once per three rounds, Aerodactyl can telekinetically launch up to 3 chunks of stone within 100 feet. These are launched as ranged attacks at separate targets, and, if at least as large as a Medium character, deal 6d6 damage each. Furthermore, upon activation, Aerodactyl gains a +1 Enhancement Bonus to Natural Armour and to all Ability Scores for the next five minutes. Using this while the bonus is still in effect improves the bonus by 1 (to a maximum of +6 total) and resets the duration − any Aerodactyl of Intelligence 10 or more (including after using this) will figure out to throw random rocks around every minute or so just to keep the bonuses at the maximum. This is a [Rock] effect.

Hatred (Ex): Aerodactyls hate all dinosaurs and primeval creatures. They gain a +2 to hit and damage them in combat, as well as doubling their critical threat ranges. However, if such a creature is in sight, Aerodactyl must make a Will save (DC 15 + half the dinosaur's HD) or focus on attacking it, ignoring any commands. It can save again every 3 rounds, or when the opponent dies/flees.

Ancient Beyond Time (Ex): Aerodactyl is older than dirt. It remembers a time when there were only dinosaurs and sentient rocks. Or something. Anyway, it is treated as having ranks in Knowledge: History equal to its hit dice, and is treated as a Great Wyrm True Dragon for the purpose of taking feats, including being able to take [Epic] feats.

Pokémon Traits: Electric, Rock, Ice, Steel, and Water effects are Super Effective, gaining a +4 Circumstance Bonus to the attack roll or Save DC, and dealing extra damage equal to the attacker's hit dice. Bug, Normal, Fire, Poison and Flying attacks are Not Very Effective, taking a −4 penalty to the attack roll or Save DC, and reducing the damage by Aerodactyl's hit dice (10). Flying Type Pokémon usually fly, which puts them out of range for many attacks, but if they stand on the ground, an earthquake can still hurt them, and if you can throw mud into their face, it still has an actual effect. Aerodactyl's natural weapons are [Rock] attacks, but can instead be [Flying] attacks when actually flying. It is immune to Critical Hits from any attack that is not Super Effective, and when touching the ground has Tremorsense 30'.

At 14 hit dice, it learns Smack Down (Ex): it can fire boulders at people with a Standard Action. These are so large that it doesn't make a ranged attack: the target must pass a Reflex Save to avoid it (Strength-based), though if they are lower than it is, they gain a +4 bonus to the save — it's hard to aim down. Anything hit takes 8d6 damage and falls prone — flying creatures stop flying and begin falling. This is a [Rock] effect. In Contests, if anyone else has already used a [Flying] move in that Round, they automatically go last next Round, and cannot use a [Flying] move on that Round.

At 18 hit dice, it learns Stone Edge (Ex): with a Standard Action, it can make a special Tail attack: its tail becomes a sharpened rock "blade", and smashes into the enemy, shattering into granite shards. The attack has a 16-20 Threat Range (11-20 if its Tail's threat range is normally doubled), and each d6 of damage is increased to d8. This is a [Rock] effect. In Contests, it gains an additional point if it wins one or more points.