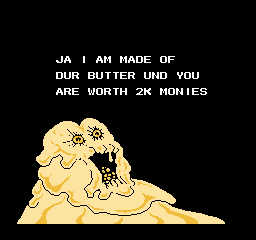 Ja, I am made of dur butter und you are worth 2k monies.

A strange, delicious, but amazingly unhealthy golem composed entirely of half-melted butter, the butter golem is a questionable creation of some mad wizard. The blueprints escaped his hands, and now everyone can create a butter golem, provided they have enough butter.

The butter golem is a large yellow humanoid made of butter, its face and body highly distorted by the half-melted butter pouring off of its obese frame like sweat. It has a faint, salty oder and a distinct taste which is delicious, or overwhelming in massive amounts.

Butter golems stand 8 feet tall and weigh 2000 lbs. They do not speak, but rumor persists that the first butter golem was intelligent and gave rise to the curious phrase of "Ja, I am made of dur butter und you are worth 2k monies." Said golem was reportedly "defeated by communism", whatever that means. It was a very strange wizard.

Butter golems follow orders to the best of their abilities. They slam creatures to curse them, especially if they have help from any creatures with bite attacks, then move in to engulf the creature and drown them in butter.

Flaming weapons and other weapons which deal fire damage as part of their attack bypass their damage reduction. Curiously, butter golems seem to have an instinctual fear of creatures using dwarven bread weaponry. It doesn't deal any more damage to it than normal and they will attack if no other targets are present, but they do seem to loathe it. Perhaps it is because nothing is more delicious than a toasted dwarven bread weapon with butter.

Amorphous Body (Ex): The butter golem is almost an ooze in how fluid it moves. It is capable of slipping through spaces as if it was a creature two times smaller, and has a +10 bonus to escape grapples.

Buttery Curse (Su): When hit with the butter golem's slam attack, creatures must make a Fortitude save or become covered in delicious buttery spread. The spread is thin enough not to cause grip problems, but the creature gains the Delicious flawDragon#330. All monsters attack you if able, regardless of their attitude to the rest of the party. Intelligent creatures can choose not to but still prefer to attack you. You count as a creature two sizes smaller for swallow whole. You do not gain the benefit of an extra feat. This flaw is permenant until the curse is removed by remove curse. The butter golem is not affected by Delicious.

Engulf (Ex): A butter golem can simply mow down Large or smaller creatures as a standard action. It cannot make a slam attack during a round in which it engulfs. The butter golem merely has to move over the opponents, affecting as many as it can cover. Opponents can make opportunity attacks against the cube, but if they do so they are not entitled to a saving throw. Those who do not attempt attacks of opportunity must succeed on a DC 17 Reflex save or be engulfed; on a success, they are pushed back or aside (opponent’s choice) as the golem moves forward. Engulfed creatures are subject to the golem's slam attack each round and must hold their breath or risk drowning in butter. They are considered to be grappled and trapped within its body. The golem is not considered grappled, it only needs to maintain the grapple each round. It can hold and thus grapple up to 1 Large, 2 Medium, 4 Small, 8 Tiny, 16 Diminutive, or 32 Fine creatures at once. The save DC is Strength-based.

Immunity to Magic (Ex): A butter golem is immune to any spell or spell-like ability that allows spell resistance. In addition, certain spells and effects function differently against the creature, as noted below.

Any fire spell works normally and the area under the creature is affected by a grease spell (the butter golem is unaffected as normal) with a duration based on the caster level of the fire attack, if any (minimum 1).

Any cold spell slows the golem (as the slow spell) for 1d6 rounds, but doubles its damage reduction.

A purify food and drink spell cast directly at a butter golem cures it of 1 hp per caster level.

Slippery Spread (Su): The butter golem can duplicate the effect of grease at will as a supernatural ability, with a caster level equal to their HD. The save DC is Constitution-based instead of Charisma-based.

A butter golem’s body is created from 2000 lbs of freshly churned butter, mixed in with various alchemical tinctures and admixtures for color and flavor and costing at least 500 gp. Assembling the body requires a DC 20 Craft (cooking) check or a DC 20 Profession (farmer) check.