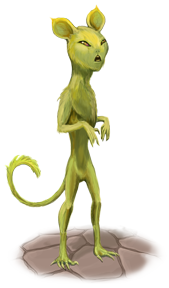 I'm not creepy, I just want to watch your feet while you sleep...

Before you is a small, furry, yellow creature which almost looks like a moogle, but devoid of wings. Then you realize its round pink "nose" is actually a mouth held eternally open in dull surprise.

Few things are as evil, as depraved, and as wicked as the Canolacat. Technically fey, they were kicked out from the ranks of unseele for being too evil and twisted and for terrorizing not merely humanity, but even other fey. Ejected to chaotic evil planes, they live in a society where might makes right, and where anyone unfortunate to wander into their lands becomes the subject of their wickedness. It would be a death sentence for sure, were it not for the fact that their evil is inversely proportional to their effectiveness. Weaker than even the weakest of fiends, the life of the Canolacat is short, brutal, and chaotic. They work best when working with others, and as such, they struggle to keep from killing each other long enough to gang up and beat up on other beings weaker than themselves.

Alone, a canolacat is utterly worthless in combat. It is said that even the strongest among them had been slain by a little girl, its face crushed in by her bare hands. They can only pose a threat en masse, using the bonuses to make successful attacks. They focus on grappling creatures, then constricting them. If they lose too many of their number, they will be forced to retreat.

Creepy (Ex): As a standard action, a canolacat can open its mouth and speak in a very disturbing way. Creatures within 60 ft must make a Will save, DC 11, or be sickened for 1 minute. If used on a sickened creature, they are instead nauseated for 1 round. The save DC is Charisma-based and includes a +3 racial bonus.

Swarm Tactics (Ex): Canolacats, for all of their chaotic behavior, do work best when working with others. A canolacat gains a +2 circumstance bonus on attack rolls and ability checks for each other canolacat adjacent to it, to a maximum of +10 at 5 other canolacats. A canolacat can also pass through and charge though its own allies.