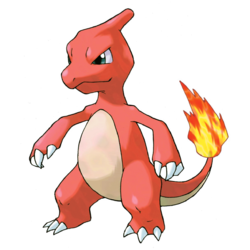 This red-scaled lizard walks toward you on two legs, as it makes threatening gestures with its foreclaws. A plume of smoke flares from its nostrils as it glowers menacingly.

Slash: A Charmeleon’s claws are considered to have a threat range of 18-20, and penetrate DR as though they were magic weapons.

Skills: Charmeleons get a +2 Racial bonus to Craft checks that involve metal.