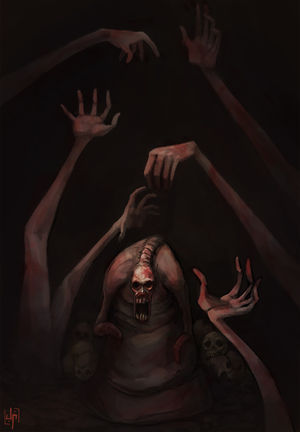 You enter a cold shadowy room with a dirt floor. All around you pale white elongated arms grow from the earth like perverse plants growing from the ground. Suddenly one lashes out and grabs you in its icy grip as a mound of festering flesh rises from the center of the room.

The dead hand is a creepy undead creature which lives in grave soil, often at the bottoms of tombs in places it can sink into the dirt. Its lairs are populated by multiple pale arms which are far too long to belong to any creature and tripped with blood-stained nails. They have a deceptively powerful grip in order to hold you down as its main body, a slithering torso with spikes for hands, massive unhinging jaw, and empty eyesocks rises from the soil to devour you whole. Only the bravest can stand before it.

A dead hand is an ambush predator. Usually someone will move too close to an arm, or attack one, provoking its wrath. It will not surface until its dead hands have grappled at least one creature, in which it rises in the center of its arm cluster and starts moving towards its victim. Once it is by a grappled opponent (in a dead hand or otherwise) it will make a bite attack and swallow them, then escape underground to digest, repeating with the next victim. If a dead hand is dug up before it finishes eating, it will rise and defend itself.

Augmented Critical (Ex): The bite attack of a dead hand has a 20/x3 critical.

Aura of Terror (Su): When a dead hand reveals its main body, attacks, or performs a hostile action, all creatures within 60 feet must make a DC 18 Will save or be paralyzed for 1 round. A creature which succeeds on the saving throw is immune for 24 hours. This is a mind-affecting fear effect, and the saving throw is Charisma based.

Dead Hands (Ex): A dead hand creature has a number of titular "dead hands" equal to half its HD. Dead hands can be manifested anywhere in a 60 foot radius, taking up a 5 foot square and threatening out to 5 feet as if it were a medium creature. Though the dead hands cannot attack directly, they can react to attacks of opportunity and make grapple attempts. The dead hand creature is not considered grappled when grappling with its dead hands, and it can grapple one creature per hand.

The dead hand creature can retract and extend its dead hands as a free action only on its turn (thus moving their position). The dead hands themselves are invincible, but they can be suppressed. If the dead hand takes 20 damage in a single round, it retracts and cannot be placed back out for 1d4 rounds. It also releases any creature that dead hand was currently grappling.

Improved Grab (Ex): To use this ability, a dead hand must hit with a talon or dead hand attack. It can then attempt to start a grapple as a free action without provoking an attack of opportunity.

Swallow Whole (Ex): The dead hand can try to swallow a grabbed opponent of Large or smaller (as its jaw unhinges by a great amount) by making a successful bite attack. It can then attempt a grapple check as a free action without provoking an attack of opportunity. Once inside, the opponent takes 1d6+8 points of crushing damage plus 1d6+8 points of negative energy damage per round from the dead hand's unholy extradimensional gullet. A swallowed creature can cut its way out by dealing 20 points of damage to the dead hand's digestive tract (AC 16). Once a creature exists, muscular action closes the hole; another swallowed opponent must cut its own way out. The dead hand’s gullet can hold 1 Large, 2 Medium, 16 Small, 32 Tiny, 128 Diminutive, or 512 Fine or smaller creatures.