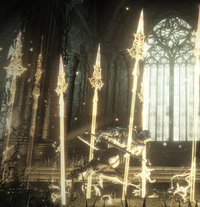 A knight falling victim to the spell.

Those caught in the area are dealt 1d6 magic piercing damage per caster level (max of 15d6) against all creatures within the area. All caught creatures are also impaled on the spears, falling Prone and becoming Immobilized for 1 round. A successful Reflex save halves the damage and negate the impalement.

The spears are able to damage incorporeal foes as if they were Ghost Touch. The damage dealt by this spell count as aligned with your alignment for the purpose of bypass damage reduction or regeneration.

The spears last for 1 round, counting as difficult terrain as long as they remain, additionally if a creature fall upon them from a height they are dealt this spell's damage in addition to any falling damage they may receive.