Entromorph are xenotheric creatures born from the entropic void outside the universe. Entromorph quickly moved into the known universe where they became apex predators. While entromorph have a grim reputation they are not all hostile, a few are even friendly and cooperative. 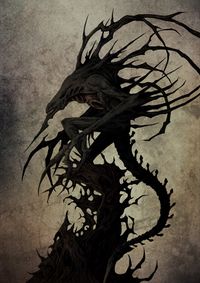 While they are well known for their hostility and aggressiveness, entromoprh are actually smart and curious creatures. The majority have a deeply ingrained sense of superiority over other creatures, while usually not attacking them on sight they are quick to resort to violence. However a few entromoprh are quite talkative and often find ways to shapechange into other creatures to better interact with them. Overall the entromorph have diverse personality are often loners.

Entromorph are massive, standing at around 9'0 and weighting around 4 tons. Their body is covered in black chitin-like skin, their mouth is very large and wide with a disturbing number of extremely sharp teeth. They two pairs of arm, on their main pair they have large sharp claws capable of slicing an humanoid in one strike while their secondary pair have precise digits to write and manipulate objects. An entromoprh face is very elongated and they have a single very large horn located under their face on their 'chin'.

Entromoprh typically entertain poor relations with other races, being large, scary and not known for their good move and friendly behavior. Most entromoprh use alternate forms when attempting to speak to other races.

The majority of entromoprh tend to be chaotic neutral or chaotic evil, but individual entromoprh can be of any alignment.

Entromoprh are solitary creatures from the depth of space. They do have lands to call their own.

Entromorphs are typically dismissive of religion and they do not possess any racial gods.

Entromoprh typically use their own telepathic language, entroa, but they are capable of vocalizing more standard language although with some difficulties.

Entromoprh typically choose their own name. Entromoprhs are genderless creatures and thus tend to shy away from gendered names.