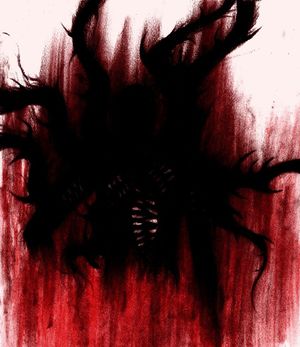 The gate is open. Zalgo fills the room.

ZALGO. He who waits behind the wall waits no longer. A gate of tortured glass has been built, and within its impossibly angled straight curves boils a star of darkness, a portal to the world of Z̷A͡LGO. Woe, woe, woe unto the world unto which the gate has been built. In his palace of tortured glass, served by legions forged from the tears of the sleepless dead and clad in armor carved from the suffering of mothers, he awakens and pours into this world. The room fills with Z̸̠͕̝͕̤̜̐͂̾ͤ̿ͯ̋͜͝A̖͓̯͊̇ͩ̕͟L̗̼͕̼̺ͥ̀ͯ̂͢G̴̟̹ͧ́̔ͮǪ͔͔͕̓̃̕.

Even given "substance", none have ever seen his true form. Blinded by darkness and served by eyeless cultists thrice mad, his image is obscured. Yet all come away speaking the same, of a being with no eyes, of seven mouths and uncountable tentacles, barbs, and teeth. A being of pure malice and hate for this world and all that it stands for. And all one can feel after is pain.

He Who Waits is immobile, fixed to the gate, yet ever-spreading. The real opponent here is not Zalgo, who cannot be killed, but the gate which he pours through. Only by destroying the gate can Zalgo be defeated. This is not easy, as the gate, "his body", is far more durable than its glassy appearance would imply, and Zalgo will try to stop any would-be heroes. The moment Zalgo feels threatened (usually after he or the gate takes damage), it will begin to sing the song that ends the earth (see Seven Mouths). The PCs must hurry, either delaying the song or seeking to destroy the gate quickly. Zalgo mixes physical and magical attacks as appropriate, usually favoring magic when possible.

If the heroes win and the gate is destroyed, Zalgo will be banished, but will quickly return once a new gate is formed. The PCs will need to find a way to remove memory of He Who Waits from the minds of all that know of it, including themselves. If they cannot do this, they have only delayed their inevitable demise.

Armor of Suffering (Ex): Zalgo adds his hit dice as a profane bonus to AC, and his Charisma bonus as a deflection bonus to AC.

Blind (Ex): Zalgo is blind and cannot see. However, it has infinite blindsight and can thus "see" any creature in line of effect. As a result, Zalgo cannot be flanked or affected by any visual effect.

Dead Star (Su): Every 1d4+1 rounds, Zalgo can summon the non-existence of its home universe. As a 1-round action, a gaping smoking hole of nothing opens up in the skies, stealing light, sound, and all sensation save one own's sensation of pain. On a failed save, all creatures in a 80 ft. radius burst take 50d6 damage and are sucked towards the center of the effect. The creatures are wracked with pain, resulting in a −4 penalty to attack rolls, ability checks, and ability scores for the next 10 minutes. On a successful save, creatures take half damage, are not moved, and only take the penalty from pain for 1 round. It is a Fortitude save DC 35 partial, and the saving throw is Charisma-based.

Hive-Mind (Ex): Zalgo is the Nezperdian hive-mind representing chaos. It is immune to all mind effects, and any attempts at affecting its mind (via direct contact through detect thoughts or indirect assault such as mind thrust) must make a Will save vs insanity, DC 35 negates. The saving throw is Charisma-based.

Light is Shadow (Ex): None can, or should, bear witness to his terrible visage. No light functions in a 60 ft. radius around Zalgo, even magical light or effects which see through the darkness such as See In Darkness. Indeed, it is as if the universe rejects the ability to show its form. However, non-visual methods of sight work such as blindsight and tremorsense.

Morphic Weapon (Ex): Zalgo's limbs are many and varied. Mouths, tentacles, claws, and unspeakable things burst from its engorged mass. It can make up to four natural attacks a round from any of these weapons, with no difference in damage between them, and they are treated as two-handed weapons, including for gaining strength and a half on damage. They can choose to be bludgeoning, piercing, or slashing, with each attack having a slightly different effect when they make a critical hit:

Bludgeoning: On a confirmed critical, a bone is crushed and broken. The subject takes a −8 penalty on AC when confirming future critical threats against them, until healed by the effect of regeneration or greater.

Piercing: If there are any creatures in a 60-foot cone behind the target, the attack penetrates through and strikes a second creature, using the attack roll result against their AC as normal and confirming as needed. Theoretically, Zalgo could daisy-chain attacks forever if provided enough victims in a line.

Slashing: The attack leaves a bleeding wound, dealing half the damage it dealt as bleed damage each round on Zalgo's turn. The bleeding can be stopped by a DC 15 Heal check, or healing from spells or fast healing.

Reach: Zalgo's reach is unusual. While its reach for provoking attacks of opportunity is 15 feet as normal, its reach to strike creatures with its physical attacks is effectively infinite, so long as there is line of sight. Zalgo attacks with reality itself, taking the form of spikes shooting from the ground, the air becoming an infinite chainsaw of teeth, or even an opponent's face collapsing and devouring itself. Because of this endless range and its endless blindsight, those unaware of Zalgo's invocation may be terrified to see "random murders done by the black arts of an uncaring world".

Regeneration (Ex): Nothing bypasses Zalgo's regeneration, ever. In fact, the only way to "kill" Zalgo is to destroy the gate. With that said, beating on Zalgo until it is unconscious at least helps prevent it from assaulting you or repairing its gate, until it heals enough to wake again.

Seven Mouths (Ex): The time is right, and Zalgo will bring the end upon this universe, killing it as so many others. When Zalgo's torment of the world is at an end or when it feels endangered, it will begin to sing the song that ends the earth. As a free action each round, it will open another one of its mouths and begin singing. Its terrible sound, not bound to sonic waves or sanity, warp spacetime in a manner similar to the hallucinations of corruption, but on a worldwide scale. If the seventh mouth opens, all is lost and the universe is filled with ZALGO.

The song can be stopped. When Zalgo takes damage while singing, it must make a Concentration check with a DC equal to the damage taken (after damage reduction and resistances). If it fails, it cannot advance and open its next mouth. There is no way to reverse it, short of breaking the gate, so PCs are on a time limit to save the world. There is only one chance.

The Gate: The gate is the object from which Zalgo emerges. A great engine of fear forged of irregularly angled glass folded in multidimensional space, its center is a smoking orb of nothing in which only the distant screams of children can be heard. The glass itself is fantastically strong, having hardness 40, 1000 hp, and often being repaired by Zalgo in the effect of damage. Effects which typically bypass hardness only succeed in halving the hardness to 20. Only sonic and force damage are not halved before hardness applies. Attacking the gate has its own set of problems, that being its Tortured Glass effect.

For all purposes, the Gate takes up the same space as Zalgo, though they are two separate targets. Attacking the gate provokes an attack of opportunity from Zalgo. Zalgo can use a standard action to transfer up to 250 points of its own hp into the Gate each round.

Tortured Glass (Su): Whenever the gate is attacked, shards of glass fly off and strike down nearby victims. Any creature that strikes the gate is bombarded by shards of glass, taking damage equal to the damage they inflicted upon the gate; this retaliatory damage is always epic slashing damage, regardless of the original type of damage. The range of the effect is unlimited, but requires line of effect.