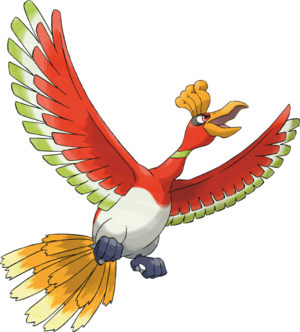 Ho-Oh, the Rainbow Pokémon! Artwork from HeartGold and SoulSilver.

With feathers of every conceivable color, the bird before you is nothing less than awe-inspiring. Fixing its steely gaze upon you, the bird sizes you up, almost as if it were reading your intentions.

The master of the legendary beasts, Ho-Oh is a massive phoenix said to be able to reincarnate the dead.

Ho-Oh specializes in dishing out physical damage and withstanding magic. It's a little slow, but its Brave Bird and Sacred Fire attacks are truly fearsome.

Pressure (Su): Anyone who makes an attack against Ho-Oh must make a Will save vs. DC 30 after the attack is resolved. If they fail, they become fatigued for 3 rounds. If already fatigued, they become exhausted instead. This applies to any harmful ability, whether it be a regular attack, a spell, a supernatural ability, or anything else that targets Ho-Oh or includes it in the area of effect. The save DC is Charisma-based.

For reasons that will never be explained, Cranidos, Rampardos, Reshiram, Zekrom, White Kyurem, Black Kyurem, and some specimens of Pinsir are immune to this. Scholars and loremasters, if they even know of this, would be puzzled for many years.

Whirlwind (Ex): As a full-round action, Ho-Oh can flap its wings in a frenzy that whips up a mighty blast of wind. This wind affects all creatures except for Ho-Oh itself in an 80-foot cone originating at the center of Ho-Oh's space. Creatures of a size category equal to Ho-Oh's must succeed on a Fortitude save or else be blown 2d10×1000 feet away in a straight line; success on the Fortitude save halves this distance. (The Fortitude save DC is Dexterity-based.) Creatures smaller than Ho-Oh are blown an extra 500 feet away per size category below Ho-Oh's, while creatures larger than Ho-Oh are blown 500 feet less per size category above Ho-Oh. A creature that collides with something in this way takes 1d6 damage per 100 feet it had left to travel and inflicts an equal amount of damage to the obstacle. If this destroys the obstacle, the damage dealt to the creature is halved. If the obstacle is not destroyed, the creature's movement is stopped. Ho-Oh may only use Whirlwind once per minute.

Weather Ball (Su): This ability can be used once per 2 rounds. It is cast like a fireball, except the damage and descriptor varies based on the weather:

Gust (Ex): As a standard action, Ho-Oh can trample creatures it flies over. Ho-Oh merely has to fly above the enemy within 15 feet of it (that is, the opponent has to be in Ho-Oh's melee reach). Ho-Oh's gust attack deals 1d8 + Dexterity Modifier of subdual damage. A gusted opponent may attempt an attack of opportunity with a −4 penalty to the attack roll (assuming that it has a reach of 5 feet or more). A gusted opponent who chooses not to make an attack of opportunity may instead attempt a Reflex save for half damage (DC 10 + ½ Hit Dice + Dexterity Modifier). This is a [Flying] effect.

Brave Bird (Ex): Ho-Oh can dive-bomb opponents with reckless abandon, putting all of its power into the attack. Ho-Oh may activate this ability by going into free-fall. If it hits another creature on the way down, or lands on top of a creature, that creature takes three times the falling damage that Ho-Oh did, in addition to slam attack damage. This move is a [Flying] effect.

Extrasensory (Ps): As a standard action, Ho-Oh can overload the senses of a single opponent within Medium range, doing 1d8 damage per Hit Die and stunning that opponent for 1d4−1 rounds. A Will save is allowed to halve the damage and negate the stun (save DC is Charisma-based). This is equivalent to a 7th-level power. This is a [Psychic] effect.

Fire Blast (Sp): Once per 1d2 minutes, Ho-Oh may launch an extra-potent fireball with no damage cap and an explosion radius of 25 feet per caster level (Ho-Oh's caster level is equal to its Hit Dice). Ho-Oh's fire blast does 1d8 damage per Hit Die. It is a [Fire] effect and (for Ho-Oh) the equivalent of a 6th-level spell.

Sacred Fire (Su): Once every 1d4−2 rounds, Ho-Oh can send out a wave of fire in all directions. The burst of flame is 80 feet tall, and extends to a radius of 10 feet per two HD. All creatures and objects within the flame wheel suffer 2d6 fire damage per HD Ho-Oh possesses (no save). In addition, all creatures damaged by the Sacred Fire must succeed on 3 consecutive Fortitude saves (DC = 10 + ½ Ho-Oh's HD + Ho-Oh's Strength modifier) or else suffer a burn. This is a [Fire] effect.

Punishment (Ex): With a standard action, Ho-Oh may make a touch attack against a foe, and if they have any ongoing magic effects on them, it deals 1d6 damage per caster level of the highest-CL effect on them. In a Contest, if this is used, then anyone in the same round who tries some kind of dirty trick but rolls lower finds it backfiring, and loses a point. This is a [Dark] effect.

Ancient Power (Su): Once per three rounds, Ho-Oh can telekinetically launch up to 3 chunks of stone within 100 feet. These are launched as ranged attacks at separate targets, and, if at least as large as a Medium character, deal 6d6 damage each. Furthermore, upon activation, Ho-Oh gains a +1 enhancement bonus to natural armour and to all ability scores for the next five minutes. Using Ancient Power while the bonus is still in effect improves the bonus by 1 (to a maximum of +6 total for natural armor and each ability score) and resets the duration – Ho-Oh knows to throw random rocks around every minute or so just to keep the bonuses at the maximum. This is a [Rock] effect.

Safeguard (Sp): As a move action, Ho-Oh may cloak itself in a shining aura that completely protects it from all negative status conditions (including paralysis, numbing, poison, disease, confusion, stunning, dazzling, and dazing) for 5 rounds. This ability is the equivalent of a 4th-level spell.

At 25 HD, Ho-Oh learns Recover (Ps): As a standard action, Ho-Oh psionically heals itself, regaining up to half its maximum hit points. This is the equivalent of a 6th-level power. Ho-Oh may use Recover once every 1d4 rounds.

At 27 HD, Ho-Oh learns Future Sight (Ps): As a standard action, Ho-Oh can conjure up a delayed-action torrent of psionic force. After two rounds have passed, the attack finally strikes, and all creatures within five hundred feet take 1d10 force damage per level, ignoring all damage reduction, energy resistance, immunities, and regeneration. Ho-Oh is immune, as are any creatures Ho-Oh feels like granting immunity to. If Ho-Oh is unconscious or dead when the attack strikes, then only Ho-Oh is immune. A Will save may halve the damage (DC is Charisma-based). Only one Future Sight can be preparing to strike at a time. This ability is the equivalent of a 7th-level power. This is a [Psychic] effect. In Contests, any points gained from using this are gained again the following round.

At 30 HD, Ho-Oh learns Natural Gift (Su): Ho-Oh may draw power from a consumable magic item on its person to launch a vicious physical attack. When using this ability, Ho-Oh makes a single melee attack as a standard action, and if it hits, it does 1d6 damage per caster level of the item, plus 1d10 damage per spell level of the item. This consumes the magic item. Ho-Oh may also expend a charge from a magic item with limited uses in order to use this attack. The type of the attack depends on the specific magic item used to perform it (for instance, it would be a [Fire] attack if used with a wand of fireball). (Ho-Oh itself is not able to use magic items not designed for a bird-like creature, but can still draw upon their power to execute this attack if it is carrying them on its person.) This attack cannot be used with magic items that do not have limited uses.

At 33 HD, Ho-Oh learns Calm Mind (Ps): As a standard action, Ho-Oh may meditate and gain a +1 insight bonus to Wisdom and Charisma for 2 minutes. It may repeat this as many times as it wishes, with each usage increasing the bonus by +1 (to a maximum of +6) and resetting the duration. This is the equivalent of a 2nd-level power.

At 35 HD, Ho-Oh learns Sky Attack (Ex): Ho-Oh can hold itself back somewhat when dive-bombing its enemies, inflicting somewhat reduced damage but preventing itself from receiving any damage in the process. Ho-Oh may activate this ability by going into free-fall. If it hits another creature on the way down, or lands on top of a creature, that creature takes falling damage instead of Ho-Oh, in addition to slam attack damage. This ability cannot be used in conjunction with Brave Bird; Ho-Oh must declare whether it is using Brave Bird or Sky Attack before beginning its free-fall. This move is a [Flying] effect.