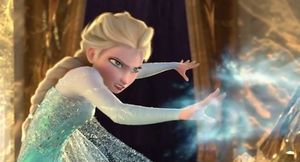 You bring cold and ice everywhere you go.

This class makes extensive use of spells and templates from the Frostburn sourcebook.

Abilities: Your save DCs are based on Charisma.

Races: Ice Mages appear in all races, though are most common among races that live in regions with significant winter seasons.

Alignment: Cold is a force of nature, and as such a lot of Ice Mages tend to be neutral.

All of the following are class features of the Ice Mage.

Weapon and Armor Proficiency: Ice Mages are proficient with all simple weapons and all light and medium armors.

Cold Resistance (Ex): An Ice Mage has a Resistance to Cold equal to twice their level. The Ice Mage is also unhindered by environmental or terrain effects related to cold, ice, and snow.

Ice Bolts (Su): An Ice Mage can throw bolts of ice as an attack action. An Ice Bolt travels out to Close range, and inflicts 1d6 points of Cold damage per level. An Ice Bolt strikes its target with a ranged touch attack.

Chill Factor (Ex): Every time an Ice Mage inflicts damage with a spell having the cold descriptor or Cold damage on any target, whether by their class abilities or another source of cold damage, they inflict an amount of extra Cold Damage equal to their class level or their Charisma modifier, whichever is less.

Cold Magic (Ex): An Ice Mage is considered to have every spell with the Cold descriptor on their spell list for the purpose of activating magic items, item creation, and qualifying for prerequisites with a caster level equal to their Ice Mage level. As such the Ice Mage is considered to qualify for the feat Obtain Familiar and a familiar summoned by the Ice Mage will gain the Ice BeastFrost template automatically. An Ice Mage's spell-like abilities granted by this class and activated magic items that qualify for this feature treat their Ice Mage level as the caster level, and saving throw DCs are DC 10 + ½ Ice Mage Level + Charisma Modifier.

Ice-Over (Su): As a standard action, a 2nd level Ice Mage can cause one creature per Ice Mage level to suddenly freeze and be covered in a thin layer of ice. A freezing creature suffers 1d6 points of Cold damage per round (the Mage's Chill Factor ability applies to each round as well), and the creature can attempt to knock the ice off and halt further cold damage with a DC 15 Reflex save (similar to rules in DMG for putting out fire, p. 303). This ability can be used out to Medium range. The Ice Mage can also cast shatter at will and its energy type becomes Cold instead of Sonic, but it continues to ignore hardness as though it was Sonic.

Cold Style Learning (Sp): At 3rd level and every additional odd level of Ice Mage (5, 7, 9 etc.) the character can select one spell from the Sorcerer list as a sorcerer of their Ice Mage level and can cast that spell as a spell-like ability 3 times per day. Spells learned and cast in this manner gain the Cold descriptor and visual manifestations of the spell have a cold appearance (Web made of ice, Greater Magic Weapon takes on an icy appearance, etc.). If a spell learned in this manner inflicts damage the damage type remains unchanged but it can benefit from Chill Factor and deal additional Cold damage if applicable. This spell will also be added to the Ice Mage's spell list per the Cold Magic class feature.

Piercing Cold (Ex): From 3rd level on, an Ice Mage's Cold cuts through cold resistance, hardness, and immunity. No more than ½ of the damage inflicted by their Cold damage can be negated by hardness or immunity or resistance to Cold. In addition, the Ice Mage ignores the first 5 points of cold resistance that a target has.

Shivering Touch (Su): A 3rd level Ice Mage can leech the heat from a person with but a touch, enabling the Ice Mage to count as armed at all times, even with unarmed attacks. The Ice Mage deals an extra 1d6 points of Cold damage with all melee attacks, and at 6th level ranged attacks also deal an extra 1d6 Cold damage. At 9th level all melee and ranged weapon attacks also inflict Brain Freeze on a successful attack.

Snow Sculpting (Sp): A 4th level Ice Mage can create simple objects from snow and ice. The Ice Mage can use minor creation as a spell-like ability at will. The objects appear normal but are cool to the touch.

Hail Blast (Sp): A 5th level Ice Mage can hurl freezing hail anywhere within Long Range as a Full Round Action. This ice explodes into a 20' radius burst and inflicts 1d6 points of Cold Damage per level. All creatures within the area are entitled to a Reflex save to halve damage.

Brain Freeze (Sp): A 6th level Ice Mage can trigger a sharp pain in a creature's mind, causing the sickness condition for a number of rounds equal to their Level. The victim must be within Medium Range, and is entitled to a Will Save to negate this effect. This is a Mind Influencing Compulsion effect. At 9th level Brain Freeze does not offer a saving throw to negate its effect.

Improved Snow Sculpting (Sp): A 7th level Ice Mage can create more complex objects and even creatures from snow and ice. The Ice Mage can shape snow as the Improved Sand Shape ability of a Sand Shaper (Sandstorm pg 78), except using snow instead of sand. Alternately the Ice Mage can use major creation as a spell-like ability at will. The creations appear normal but are cool to the touch.

Ice Wall (Sp): A 9th level Ice Mage can use wall of ice as a spell-like ability at will.

Cold Snap (Sp): At 10th level, an Ice Mage can surround their self with a nimbus of blue flames that extends for 10' in all directions from their person. All other targets in this area suffer 1d10 points of Cold Damage per Ice Mage level, but are entitled to a Reflex Save to halve damage. In addition, an Ice Mage can use fire shield as a spell-like ability at will (Chill Shield only).

Brumal Architect (Su): An 11th level Ice Mage can create effects as though they possessed a Lyre of Building with the exception that any construction built must be made of ice or snow, and the Perform check (DC 18) is not limited to string instruments.

Icewalk (Su): At 11th level an Ice Mage can walk into any piece of ice large enough to fit their person and appear in any other piece of ice that is likewise of sufficient size anywhere on any plane of existence. The Ice Mage must know where the target ice is. The Ice Mage can take any number of willing creatures they are touching or carried objects that are also able to fit in both ice pieces.

Blizzard (Su): As a Full Round Action, a 13th level Ice Mage can create huge billowing clouds of snow. The blizzard must be created within Long range and persist for 3 rounds regardless of whether the Ice Mage remains within range. The blizzard functions as solid fog except the cloud is shapeable, and covers at most 3 x 10' cubes per Level. Each round on your turn, starting when you complete using this ability, the blizzard deals 6d6 points of Cold damage (plus Chill Factor bonus) to each creature and object within it. Creatures and magical objects affected can attempt a Fortitude save to halve damage.

Absolute Snow Sculpting (Sp): A 14th level Ice Mage can use greater shadow conjuration as a spell-like ability 3 times per day, but the creation is obviously made of ice and treated as having already been perceived as unreal and is at 60% potency for all effects.

Flash Freeze (Sp): A 14th level Ice Mage can use flesh to icefrost as a spell-like ability at will.

Back to Main Page → 3.5e Homebrew → Classes → Base Classes