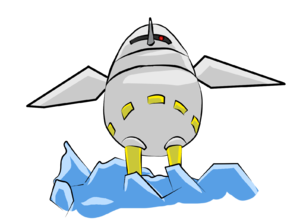 This machine is a giant silver gumdrop shape with bladed "wings" at its side spinning around its body, a single monocular eye, and ports all over for booster jets and missiles. As it glides your way, small torpedo shaped constructs drop from its side and pursue.

Designed as a weapon of war, the iron rook is build for efficiency over design. A large gumdrop shaped container filled with missiles and autonomous assistant robots, it stands on stubby legs but generally hovers on jets for faster movement. It has several weapons which have different functions for maximum action economy and utility, while being abnormally tough itself. Its body is composed of an alloy similar to vichromium, protecting it from magical and photon based ranged weapons, while its potential energy armor foils melee attackers.

Iron rooks do not talk, and can only make mechanical noises and a sound similar to "wak", presumably as a side effect of its unusual and ill understood power system. They do have an intelligent AI, but their personalities are so dull and focused on their tasks at hand that one can barely notice. Iron Rooks are often frustrated at their lack of hands, and generally treat any problem which requires the use of dexterity with violence.

Iron Rooks generally take cautious or defensive measures, and are not afraid to engage in guerrilla warfare if the situation turns south for it. It sprints away and formulates plots and plans, waiting until the situation is more opportune. If given time to prepare, it will start with a full compliment of Runner Torpedos (5) to attack with during an ambush.

Ablative Armor (Su): The iron rook's silvery body is wrapped up in a supernatural force field of potential energy that strengthens the durability of its frame. When struck by an attack, it explodes outward, dealing damage to its offending target. As a non-action, the iron rook can decrease its natural armor bonus by 1 or more points. For each point decreased, it can reflect up to 5 points of damage on the attacking weapon (or for natural weapons, against the attacking creature), up to half the damage it received. For example, a barbarian can hit it for 33 points of damage. It can drop its natural armor by 3 points, and deal 15 points to the barbarian's weapon.

Its natural armor is restored at the end of its turn. The damage is resolved after the weapon's attack.

Body Blades (Ex): The iron rook has a pair of wing-like blades on its body, which it can spin around like a blender. Besides being able to be used as melee weapons, any creature attempting to grapple the iron rook receives the body blade damage each round.

Deploy Runner: Once per round as a free action, the iron rook can create a runner torpedo adjacent to it. It may act immediately upon creation.

Exploding Laser (Su): The iron rook possesses a supernatural laser which has multiple functions according to its use. All save DCs are Constitution based.

As a swift action, it can release a stunning short range bolt out to 15 ft to a single target. The creature must make a DC 22 Will save or become blind for 1 round from the flash of light, but it deals no damage. A successful save only renders them dazzled for 1 round.

As a standard action, it can be fired as a thin red ray out to a distance of 120 ft with a ranged touch attack. It deals 10d6 points of damage, plus a DC 22 Fortitude save. If the creature fails the fortitude save, the creature receives another 10d6 damage one round later.

As a 1 round action, the laser becomes a massive line area of effect out to 1200 ft, dealing 20d6 points of damage. There is no save against the damage, but the area must be selected at the start of using this ability and cannot be changed, so its not very useful except to catch immobile targets in the blast.

Kamikaze (Ex): Runner torpedos have one purpose, to explode. It can make a ranged touch attack, launching itself at a target with a ranged touch attack with a 5 ft range that does not provoke attacks of opportunity. On a successful hit, it deals 6d6 bludgeoning piercing and slashing damage (no save), with a DC 22 Reflex save to all creatures within a 10 ft radius. If it misses, it still explodes in a 10 ft radius. If the runner torpedo is destroyed, it explodes as if it used its kamikaze attack unless its body was fully destroyed or reduced to ash. The runner torpedo only exists for 5 rounds. After the 5th round, it explodes as if using kamikaze. The only thing which will stop the runner torpedo from eventually exploding is if the runner torpedo enters the iron rook's space and chooses to be re-absorbed as a free action.

Missiles (Ex): As a move action, the iron rook can fire homing micro-missiles which duplicate magic missile, except it deals bludgeoning, piercing, and slashing damage instead of force damage and is limited to a range of 60 ft. It is still stopped by a shield spell as normal.

Paint Targets (Su): As a move action, the iron rook can lock its targeting laser onto any number of targets in a 60 ft cone. The iron rook receives a +2 attack bonus, +2 dodge AC, and +2 on survival checks to track these "painted" targets, and it can always pinpoint the square of a painted target even in full concealment. It lasts until line of sight to the target has been broken for more than 3 rounds, or it uses its paint targets ability again.

Shiny Plate (Ex): The iron rook's shiny body is very useful against many effects. It has a 50% chance to be completely unaffected by any [Light] effect. Regardless if it is affected, any [Light] effect affects everything in a 20 ft radius around it as the light beams reflect off its surface. Its also useful against magical effects, deflecting all rays, lines, cones, and even magic missile spells. There is a 30% chance of reflecting any such effect back at the caster; otherwise, it is merely negated. Check for reflection before rolling to overcome the creature’s spell resistance.

Sprint (Ex): Once per hour, the iron rook can move at x10 its normal speed. Its main jet it uses to sprint is very loud, giving a -20 penalty to Move Silently checks during that round.