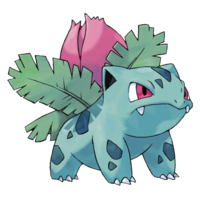 The reptilian lower half glowers at you, crouching as if ready to charge; the flowering plant on its back sprouts two tendrils as its leaves start to quiver and sharpen.

Ivysaurs are more mature versions of Bulbasaurs; Bulbasaurs usually make the transition with access to a lot of sunlight. Once a year, a Venusaur will travel the countryside and help all the Bulbasaurs who are ready to become Ivysaurs, by storing sunlight for them.

An Ivysaur is physically larger than a Bulbasaur, and it also has a flower bud distinctly visible in the middle of its bulb. The plant portion of the Ivysaur draws energy from the animal portion during crucial periods of flower production - this allows the Ivysaur to have a glorious and sweet smelling display on its back, but causes Ivysaurs to go through periods of intense hunger - during which they may become aggressive.

An Ivysaur can extend long tendrils from the base of the flower bud – these vines have the consistency of roots, and Ivysaurs are able to drink through them.

The flowers come in a range of colors, although most are white, red, or pink. Enterprising Pokemon breeders have grown Ivysaurs with special or mixed colored flowers.

Improved Grab (Ex): If an Ivysaur strikes an opponent with a Slam or Vine Whip attack, it can attempt a grapple as free action that does not provoke an attack of opportunity.

Razor Leaf (Su): An Ivysaur can emit a host of rigid and sharp leaves from its bulb that flense everything in their path. An Ivysaur’s razor leaf attack inflicts 1d10 + Ivysaur’s Hit Dice + Ivysaur’s Constitution modifier in slashing damage on every creature and object within close range (25 ft. + 5 ft. per two Hit Dice of the Ivysaur), creatures in the area may halve the damage on a successful Reflex save (DC 10 + Ivysaur’s Constitution modifier + 1/2 Ivysaur’s Hit Dice). Ivysaur may not use Razor Leaf for 1d4+1 rounds after having used it.

The Sample Ivysaur’s Razor Leaf attack inflicts 1d10+13 slashing damage to a range of 45 ft. with a save DC of 19.

Poison Powder (Ex): Creatures who remain within close proximity (10 ft.) of an Ivysaur for 2 consecutive rounds are exposed to Insanity Mist unless they do not breathe during that period (either because they do not normally breathe or because they voluntarily hold their breath). Ivysaur can suppress or resume this ability as a free action.

Plant Traits (Ex): An Ivysaur is immune to poison, sleep, paralysis, stunning, and polymorphing. It is not subject to critical hits and has low-light vision. Ivysaurs have an Intelligence score and are thus affected by mind-affecting effects.

Skills and Feats: Ivysaurs receive skills and feats as if they were magical beasts.