Mandragoras spring from the deep uncharted areas of the wild and wondrous world. Their life is vitalized by the sun and the magic in the soil.

As if touched by a fey spirit, mandragoras are typically bright and cheerful optimists, ready to laugh, frolic and enjoy life and nature. Some madragoras have mean streaks, especially wild ones, and have been known to play cruel pranks on folks, biting them to deliver their poison and then waiting for them to fall unconsciousness, where the mandragora then buries the individual up to his neck in the ground.

Mandragoras spend most of their time buried in the ground, resting and regaining their strength. 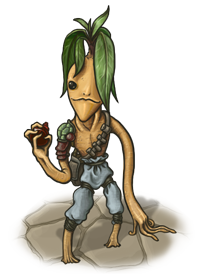 Mandragoras, for being closely related to the mandrakes, are smaller and "cleaner". Their body is the humanoid-shaped root of the plant, with the leaves growing at the top of their heads. Mandragoras stand about as tall as halflings, but are rounder, with a simplistic, roughly humanoid appearance. Their bulbous head takes up nearly a third of their height. A tuft of long, broad leaves sprouts from the tops of their heads, often covering their small black eyes. These leaves ruffle and flinch with the mandragora's behavior. A mandragora's mouth is nothing more than a large slit through its head filled with tiny sharp teeth. Mandragora's have long arms that reach nearly to the ground as they stand, ending in slender root fingers. Their legs, rather short and stumpy with stubby little toes, carry them with surprising agility.

A mandragora's hide is surprisingly smooth, shedding dirt easily. They are lighter in color compared to their mandrake cousins, ranging from light browns and grays, to pale greens and ivories.

Since plants lack muscles and skeletons, the mandragora's internal anatomy is vague. They move and bend with ease. Unlike most plant creatures, the mandragora does have some anatomy. They have capillaries that pump poison blood, eyes to see and a mouth to speak and breathe with.

Mandragoras, unlike their mandrake cousins, do come in male and female plants. Male mandragoras put off flower stalks, but do not produce berries.

In early spring, on the tops of their heads, mandragoras sprout several flower stalks with pale violet flowers. These flowers grow into reddish-orange tomato-like berries ready for harvest by late summer. A typical mandragora produces from 2 to 4 of the berries (roll 2d2 to determine randomly). The berries are poisonous, and are treated as a dose of mandragora's blood poison. Planting a berry and providing it proper care yields a new mandragora sprout that matures in 8 years.

There are folk who do poach and harvest mandragoras for poisons and alchemical ingredients, or even capture them and keep them as slaves or treating them as livestock. For this, mandragoras can be hateful towards other folk.

Occasionally, captive raised mandragoras are sold as "pets" or novelties to nobles. A mandragora's fey-like natures make them dangerously protective of children, whom they view as innocent. Their size and jovial disposition also makes them suitable, if unusual, playmates. A single mandragora might be passed down through several generations of a family.

Some cities dislike mandragoras simply for the reason that they produce poisons, which through their efforts or others, end up for sale on shadowed streets and back-alley markets.

Mandragoras are most likely Chaotic Neutral, but may be of any alignment. Their connection to nature and a fey way of life makes them a tad unpredictable and wild.

Mandragoras are common in temperate forests and even spread into warmer, tropical climates. They prefer to settle away from civilized lands in fertile soils. Often, they share lands with fey creatures.

Mandragoras don't have a patron deity, nor do they have an organized, culturally unifying religion. Some mandragoras do find service in duty to a deity, typically nature deities. Others may find service in the ranks of great fey lords, ready to lend his life for the protection of his lands and his kin.

Mandragoras speak a dialect of Sylvan. They also speak Common. Regardless of the language they speak, to humanoid ears, their accents are strange and they talk with difficulty. This is attributed to their physical nature rather than their intelligence.

As mandragoras are often raised by other cultures, they may instead know the starting languages of their adopted race.

This option is at the DM's discretion.

Mandragoras prefer using classical Sylvan names. However, when raised into another culture, they will take a name according to the traditions there.

Poison may be harvested from a mandragora, dead or alive. Though, a Craft (alchemist) or (poison maker) skill check or a Heal skill check (living mandragora only) DC 20 is required to harvest the poison.

Slow (Ex): An afflicted subject moves and attacks at a drastically slowed rate. A slowed creature can take only a single move action or standard action each turn, but not both (nor may it take full-round actions). Additionally, it takes a –1 penalty on attack rolls, AC, and Reflex saves. A slowed creature moves at half its normal speed (round down to the next 5-foot increment), which affects the creature’s jumping distance as normal for decreased speed. Lasts for 1d6+1 rounds.

Unconscious (Ex): The afflicted subject is knocked out and helpless. Lasts for 1d3 hours.