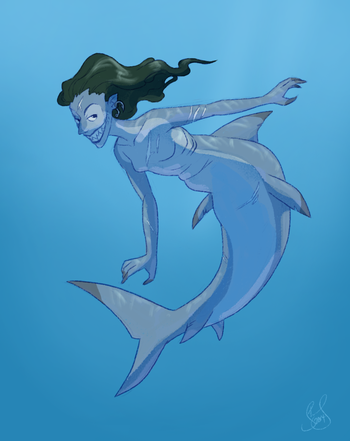 Is it happy or sad? Who knows, they all have that Glasgow Grin.

This giant mermaid seems a bit more sinister than others. Maybe it's the human skin tones being replaced by sharkskin patterns. Maybe its the angular features and sharp fins. Or maybe its the huge glasgow grin, a mouthful of sharp teeth and a smile that stretches too far. Nah, it's probably the fact they're eating your legs right now.

Just as giants exist on land, there are giants of the sea as well. The neria are the giants of mer-kind, and selachii neria are predatory forms of the kinder siren neria. Raised on a diet of their own and filled with a thirst for war, the selachii neria are feared as bandits, barbarians, and cannibals. Some of those are true, though their prey is not usually their own but that of other neria, and pretty much any meat which floats in the sea. The selachii neria have grown with a proud warrior culture, one of might makes right, survival of the fittest, and anarchy. It's made them strong, but also short lives as death finds them due to their recklessness. The most troubling part is how close they seem to normal mermaids, if unusually large, until one draws too close and the teeth are bared.

Selachii neria appear as the humanoid "mermaid" form, but with the base of a shark instead of common fish. The human part's skin tones trends strongly to taking the skinstones of the shark lower half rather than typical humanoid earth tones, and their mouth is full of sharp teeth and an extended jaw which opened too wide. They are capable of closing it to look normal, but a thin crease is always visible along the edges of their cheeks. Like their shark kin, they grow teeth constantly and their maws are truly terrifying. In spite of this and their perchance for violence, they're not complete monsters. Just like any chaotic evil humanoid, a good many can work for a cause. Many become excellent, if dangerous, guards for the truly desperate to hire and they recently have started gaining the reputation of mercenaries over senseless warriors. It's debatable if this is an upgrade.

The selachii neria and siren neria have an unsteady relationship. It's not the selachii's fault that siren are so delicious.

A selachii neria speaks Common, Giant, and Aquan, and one more local tongue with their high intelligence. They are the smallest of the neria at a "mere" 10 ft tall "standing" (21 ft from head to tail) and weighing 7,000 lbs.

Selachii neria are dangerous solo and in packs. A single selachii neria smells his prey with scent and tracks them down, waiting below until their guard is down. They circle in, and then go in for a bite. They need not kill right away; a surprised target often will try and flee, but its too late. The blood drives the selachii neria into a frenzy as it comes in for hit and run attacks, holding action to interrupt any healing attempts and finishing them off with a lucky critical or bleedout.

Augmented Critical (Ex): A selachii neria dea;s triple damage on a critical hit with its bite attack, as well as dealing 1d6 points of bleedout damage. When the bleedout damage equals the creature's Con score, the creature loses 20% of their maximum health in a bloody explosion of gore.

Blood Rage (Ex): Whenever a selachii neria deals at least one point of slashing or piercing damage, they gain +4 Strength, +4 Constitution, +2 Will saves, and -2 AC. Treat this as rage, including limitations on actions in a rage, except this stacks with rage and rage-like effects. The blood rage lasts as long one creature wounded like so is not at full health, or to the end of the encounter after which they are fatigued for 1 minute.

Capsize (Ex): Selachii neria can topple ships up to one size larger than them, causing the ship to sway and possibly tip over. The selachii neria must make a touch attack at the end of a charge against a seafaring vehicle, and then make a special strength check (1d20 + BAB + Strength) opposed by the Profession (Sailor) check of the vehicle (+ or -4 for each size larger or smaller than Huge). If successful, the ship rocks violently dealing half the selachii neria's slam damage to all creatures in the vehicle and forcing balance against falling prone and concentration checks equal to the result for creatures on the ship. If you beat the opposed roll by 10 or more, the ship capsizes completely and turns upside down. A capsized ship is completely disabled, and while air trapped under the ship can keep it afloat for a few days or weeks, it is almost impossible to turn right side up. Eventually, capsized ships will sink and slip under the waves.

Gang Up (Ex): Whenever a selachii neria threatens a creature threatened by another ally, they are considered flanking regardless if they are opposite sides or not.

Rage (Ex): Selachii neria have the rage ability of an 8th level barbarian. This stacks with blood rage when used.

Skills: Selachii neria has a +8 racial bonus on any Swim check to perform some special action or avoid a hazard. It can always choose to take 10 on a Swim check, even if distracted or endangered. It can use the run action while swimming, provided it swims in a straight line.