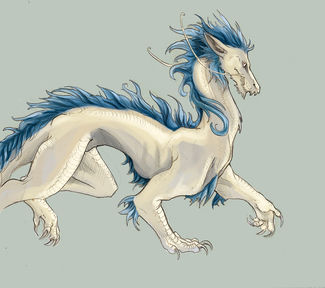 As we walked deeper into the forest, we started to notice that the surrounding world had stopped getting darker, and that, despite the canopy overhead growing thicker, the forest around us had started actually getting brighter. Then we started to feel things more. The brush of an undershirt on skin, the path of a drop of sweat down the back of a hand, the grain of the wood that made the handles of a sword. Then, in the distance, on a ridge, just visible through the thick trees, we saw a flash of white scales and faint hair. We had spotted our quarry.

Opal dragons are an incredibly rare breed of dragons, which are remarkable in their direct ties with the plane of positive energy, and the curious fact that they are an actually flightless breed of dragon. It isn't uncommon for villages who live near an opal dragon's home to seek out the aid of the dragon should a member of the village become harmed or ill. Opal dragons, for the most part, are kind, and tend to be willing to help in such matters, for the majority of their lives, but as they grow old, and watch as the world changes around them, they become more distant, and grow more separated from those around them.

An opal dragons scales are very small, each one being about the size of a small bead or coin, perfectly circular, and ranging in color from a clear, clean, ineffable white to a vibrant, strong, energetic gold. Opal dragon scales are soft and light enough, that, to the touch, it almost feels like fine, soft hair, and this illusion is also strengthened by the fact that opal dragons have a mane that sweeps down their backs, usually the same color as their scales, but sometimes appearing blue or even black.

Opal dragons are kind yet energetic souls, who are often willing to lend a hand to simple issues, or help a creature in need. Of course, they generally stay their hands when it comes to grand matters, such as wars, or espionage, though they do find it difficult to avoid attempting to stop future deaths. Of course, while it is a rare occurrence, opal dragons are known to actually partake in battle from time to time.

Opal dragons tend to collect items that can help heal creatures, that have a great sentimental value to them, or that have ties to the plane of positive energy, but generally do not otherwise have hoards like other dragons. Sometimes, when an opal dragon lives near a village, the villagers might bring the dragon an offering from time to time, but whether the dragons accept the offerings, varies from dragon to dragon. Opal dragons tend to make their homes in the depths of forests, but have been spotted travelling out through hills, or across great, flat plains.

Opal dragons rarely ever actively seek to fight a creature, unless they need to eat, and go out on a hunt. Of course, when they do fight, they generally are extremely powerful foes, whom their enemies always find nearly impossible to beat. While this is true, opal dragons still rarely ever actually move with intent to kill, and tend to merely knock out their foes, in which case it will lead with an animate objects. There are situations where an opal dragon will actually move to kill, of course, such as in the presence of hostile undead or creatures that seem bent on killing the opal dragon. In cases such as these, an opal dragon will generally start off by purposefully striking itself with it's healing breathe weapon, for a buff, and then use an animate objects casting to even the playing field, just to dance around it's enemies and proceed to blast them with their cone of baleful positive energy while they struggle with the animated objects. They also generally will keep haste active upon themselves, to make them more difficult foes to fight. Should a very old or older opal dragon be faced with undead, of course, they tend to heavily favor undeath to death, to clear out their foes.

Animate Objects (Sp): A mature adult or older opal dragon can use Animate Objects, as the spell of the same name, three times per day, except that changing the designated target or targets is a swift action, instead of a move action, for it.

True Resurrection (Sp): A wyrm or older opal dragon can use true resurrection, as the spell of the same name, once per week, except that this ability can resurrect a creature regardless of how long they've been dead, and even if they've died of old age. This ability also allows the dragon to resurrect a creature into being of any age category (their soul is still the same, so, the resurrected creature still retains wisdom, memories from their life, and motor skills, even if they're an ancient elf, being resurrected into a newborn form).

Other Spell-Like Abilities: At will—daylight (young or older); 3/day—haste (young adult or older), undeath to death (very old or older).

Special Qualities: An opal half-dragon has all the special qualities of the non-dragon parent, plus the following:

A very old opal dragon's natural weapons are treated as epic for the purpose of overcoming damage reduction.