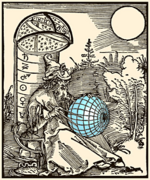 An Orb Ponderer, pondering The Orb.

Orn Ponderers are contemplative users of magic who spend a substantial part of their waking hours thinking about spheres.

Orb Ponderers need to be spellcasters with prior experience in scrying and/or spherical spells. An unusually keen eye to reflect about the subtleties of the orb is also needed. Finally but not least important, the prospective Ponderer must be a contemplative type willing to spend substantial time pondering the orb.

All of the following are class features of the Orb Ponderer.

Spellcasting: At each level, you gain new spells per day and an increase in caster level (and spells known, if applicable) as if you had also gained a level in a spellcasting class to which you belonged before adding the prestige class level. You do not, however, gain any other benefit a character of that class would have gained. If you had more than one spellcasting class before becoming an Orb Ponderer, you must decide to which class to add each level for the purpose of determining spells per day, caster level, and spells known.

The Orb (Su): The Orb Ponderer imbues a crystal orb with the magical power to make it worth pondering over.

The process for imbuing an orb with power is a simple one. The character must find a quiet, safe spot to ponder the orb for 24 hours. At the end of this meditation, the Orb Ponderer sacrifices ritual materials worth at least 100 gold pieces. If the ritual is interrupted, it can be begun again at any time, but it must run for a full 24 hours for The Orb to be imbued. The Orb Ponderer pays the gold cost as soon as the ritual has been completed.

The Orb gains additional powers cumulatively depending on the Orb Ponderer level:

All save DCs for the crystal ball abilities of The Orb are increased by your Orb Ponderer level.

Losing The Orb: If someone destroys an Orb Ponderer's Orb, only the Orb Ponderer can repair it. If enough is left of the orb to salvage, the ponderer can reforge The Orb by pondering the remains for 24 hours and sacrificing ritual materials worth 100gp (just as if he were to bind the original Orb). Should nothing remain of The Orb, the ponderer must begin anew with a crystal orb that has never before been imbued.

Pondering the Orb (Su): An Orb Ponderer can ponder their orb to prepare spells that were not prepared ahead of time. You can sacrifice any prepared spell (or, for a spontaneous caster, a spell slot) to prepare a particular spell of the same spell level or lower. You gain access to these spontaneous spell options by level. Access to a pondered spell does not grant the ability to cast it if you do not have a prepared spell or spell slot of appropriately high level to lose in exchange.

Additionally, you can only access spells of a spell level up to your class level in the Orb Ponderer prestige class.

These spells are not considered to be part of your class spell list, so this feature doesn't grant you the ability to activate spell trigger or spell completion items using these spells.