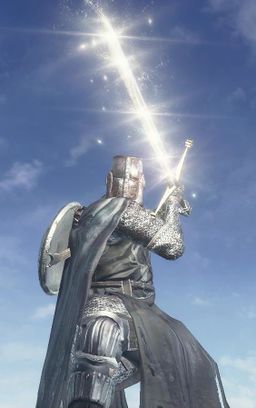 A crusader of the Way of White brandishing his sacred blade.

You imbue a weapon with a large amount of divine power, rendering it aglow in a brilliant white light. The weapon becomes magical and gains a +3 enhancement bonus to attack and damage rolls. The sacred weapon gains the revised holy quality and casts bright white light like the light spell. The added damage of the holy effect is divine in nature, and not subject to any damage reduction. If the imbued weapon is also your deity's favored weapon, it is treated as one size category larger.

Furthermore, by burning the spell's duration, the sacred weapon can unleash the following weapon arts. Effects can be combined; the amount of duration spent is cumulative. If a weapon art is invoked with insufficient duration remaining, it happens normally and ends the spell.

Divine Light Pulse: As a swift action usable at the start of your turn, you make the weapon's light pulse out, creating a daylight effect that lasts one round. Any creature within 20 feet affected by the holy effect becomes shaken and takes 1d6 points of divine damage per 2 caster levels (Will half). While this ability is active, all damage stemming from the holy enhancement is maximized. Every round in which this ability is used counts as 5 rounds.

Sacred Shield: You swing the weapon in front of you as an immediate action, creating a personal shield that lasts until the start of your next turn. The shield has 20 hit points and a hardness equal to your caster level. Every round in which this ability is used counts as 2 minutes.

Sacred Strike: You make an attack as a part of a standard action, performing a powerful special strike that unleashes a huge burst of divine power in an area. The area effect deals 1d6 points of divine damage per caster level (Reflex half). A creature hit directly by the attack takes the weapon's damage on top of the area effect damage, and isn't allowed a saving throw against the latter. Creatures that take damage from the holy enhancement are treated as vulnerable to the area effect

The area effect has the following shape and size, depending on the weapon type:

Every round in which this ability is used counts as 4 minutes.