The succedanea are a race of shapechanger that assumes the form of humanoids. This rewrites bits of their personality and soul in the process, allowing them to impersonate an individual with great precision. Sadly, this ability to serve as a replacement is often unnecessary around humanoids, who's diversity has made the succedaneum's niche redundant. They are still, however, capable creatures, if poorly understood and subject to speculation.

Succedanea are an ancient bloodline of shapechanging aberrations that have bred down through the ages to imitate humanoid form. They naturally mimic humanoid appearance and mannerisms, though unquestionably alien thoughts operate their minds. Humanoids find them difficult to predict and understand. Succedanea are typically peaceable and docile. As they mimic emotions and behaviors, when their ire rises, they may either lash out with raging fury or cold malice. Most succedanea present an indifference or aloofness to the world around them. Incidentally, because of their ancient breeding, many succedanea attempt to fit in among humanoid societies to satisfy their natural instinct and curiosity. However, they often fail at this task and their numbers have grown low in recent ages. They are a relic of an older, richer age.

They are instinctually driven by impulse and lust. Their desires and motivations urge them forward. Most succedanea have a poor sense of humanoid social graces and rarely respond to insults, threats or intimidations.

When under duress, a succedaneum often lets out a loud screeching cry, forgoing language or cursing as expression. 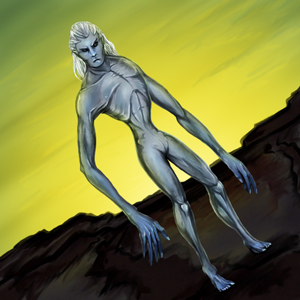 In their natural form, they appear as lanky, medium-sized humanoids. Their skin and sinews hold tight to their frames, making them appear shriveled and gaunt. Most naturally slouch their shoulders when not imitating humanoids. Their facial expressions often come off as curious and confusing, with unsettling grimaces and odd glances.

Their skin runs a range of pale bluish hues. Their deep-set eyes are wholly black. Their hair tones range from black to white, with gray being the most common, though many succedanea are naturally hairless. Their nails are as the same color as their hair. Among the hairless, this often means having white nails.

They are a diverse group. Through the ages, many strange quirks have developed in their bloodline. Odd mutations like divergent skin tones (often in shades found among local humanoids), a lack of external ears, golden-hued eyes and a differing number of fingers and toes have all been reported.

It is unknown if succedanea have sexes or if their appearances are simply the result of imitating humanoids. Common specimens have been found lacking any reproductive capability in a natural form, while others possessed dual-sexes (as hermaphrodites). On occasion, a members of the race have mixed or additional reproductive traits. While rare, it is not unknown for "female" succedanea to become pregnant after imprinting a soul onto itself.

Scholars have recently begun studying the "nocturnal lunar reaction" found in some succedanea. Notably powerful members of the race undergo an odd transformation at specific lunar events (most often the new moon) during night-time. Most notably, the succedanea gains a straightened posture, bronze-toned skin and sunny yellow eyes. Though this only appears to happen when the creature is in its natural state and appears to have no other effect.

Their clothes are often cheap and worn if they're in their natural form. Those that imprint, attempt to blend in more suitably.

Research has led scholars to believe that succedanea share a common ancestor with doppelgangers. The two races have been noted as not sharing any undue animosity and exhibiting curiosity and comfortable relaxation when among each other.

Typically, most humanoid common folk distrust succedanea for their strange habits and abilities.

A succedaneum may be of any alignment, but neutral is the most common. A succedaneum that uses its Soul Imprint ability often changes alignment.

Succedanea often attempt hide amongst other races when in large cities. It is easier for them to successfully blend in among a diverse population. This often means frontier settlements and trade towns where humanoid races freely intermingle. When not among other races, succedanea are noted to be found in abandoned buildings, ruins or other places where humanoids have left their mark on the land and left enough interesting artifacts behind.

Occasionally, small communes of succedanea appear in isolated lands. They are thought to gather for breeding rather than a need for community amongst their own kind. These communes often don't remain for more than a year or two at most.

Succedanea are rarely religious and hold no proclivity toward piety, as most deities cater to the vast populations of humanoids. However, some succedanea find a religious calling after taking particularly pious individuals as soul imprints. Clergy and scholarly monks have left records of succedanea devoting their ageless lives for the cause of their church. Many churches are loathe to grant positions of authority to these unnatural creatures who've gained their calling in such a questionable and fickle way.

Succedanea typically speak Common, often better than most races, getting the most meaning out of their words. They push languages to their limits of conveyance of meaning. With their unusual mindsets, a disjoint in a conversation (by using words that might sound out of place or context) in invariably likely given time. Occasionally they'll use racial slurs if they find them to be of appropriate detail and flavor, being unaware of social graces and verbal harm. They also learn the languages of those civilizations around them to help them blend in better.

Succedanea give names to their offspring based on whatever whim strikes them at the moment. Typically, this means names based off the lands around them, archaic words from ancient tomes they study, or even their fellow companions. Succedaneum names aren't cohesive as a group and don't hold much significance to their racial identity. Succedanea may change their names after taking on a particularly impacting soul imprint.

The succedanea often hone their racial abilities as they grow stronger. Here are a few [Racial] feats designed for use with the succedaneum race: