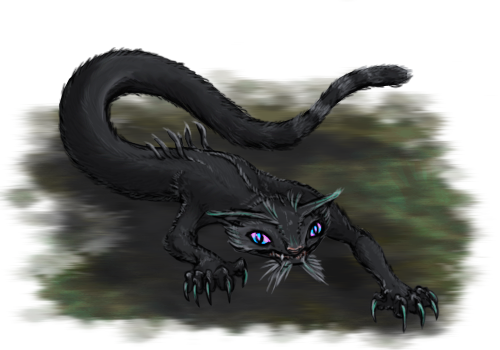 Tatzies prefer to lunge at their prey when they are caught off guard, springing out from hidden areas unseen. When outclassed or approached by anything it doesn't know or trust, a tatzy will employ its Hypnotic Eyes and attempt to make a get away. When making a constricting grapple, it often goes for the creature's neck or face, where when wounded, the tatzy will release it's noxious blood causing its assailant to breathe in its toxic fumes.

Skills: Tatzies have a +4 racial bonus on Hide, Escape Artist and Spot checks.

A tatzy has a +8 racial bonus for grapple checks.

A tatzy may use either its Strength or Dexterity modifier for making Climb skill checks as well as receiving a +8 bonus on Climb checks.

Tatzies are slender, black fur-covered creatures with a catlike head and forelimbs with a serpentine lower-half, as though their bodies extend directly into their tails. The typically move in a bounding springlike motion at full speed, though may slither and crawl along when stalking food. Tatzies are quite bold and are known to attack livestock animals when their territories are encroached upon, grappling and strangling them before eating and consuming as much meat as possible. The tatzy is an opportunistic carnivore, taking any animal as food, given the chance, often going out to hunt at dawn and dusk before retreating to a secluded area to hide and rest.

When presented with danger beyond their scope, a tatzy will often rear up fiercely as a bluff, perhaps employing its Hypnotic Eyes, before springing away as fast as possible.

Most tatzies are found in mountainous ridges where animals still thrive and the climate is temperate. It is not unknown for them to be found in lowland temperate forests among hills and valleys where brush, fallen trees, undergrowth and rocky outcroppings provide shelter and cover.

Adults are primarily solitary creatures. Though, they may be found in small family groups, typically during mating season or before a mother has weened her young. Rarely, litter mates will bond for life and hunt cooperatively.

Poison may be harvested from a tatzy, dead or alive. Though, a Craft (alchemist), Craft (poison maker), or a Heal skill check (on a living tatzy only) DC 20 is required to harvest the poison.

A dead tatzy in good condition can produce 1 dose of raw poison. Harvesting raw poison from a living tatzy deals 1 point of Constitution damage to it with each attempt.

The DC of the poison often varies from the listed Base Price of 100 gp for a DC 10 poison. Every additional +1 to the poison's DC increases the Base Price by 25 gp. To calculate the poison's market value, use the formula below.

Slow (Ex): An afflicted subject moves and attacks at a drastically slowed rate. A slowed creature can take only a single move action or standard action each turn, but not both (nor may it take full-round actions). Additionally, it takes a –1 penalty on attack rolls, AC, and Reflex saves. A slowed creature moves at half its normal speed (round down to the next 5-foot increment), which affects the creature’s jumping distance as normal for decreased speed. Lasts for 1d6+1 rounds.

Tatzies are treated as wild animals for the purposes of training with Handle Animal checks. Though they retain a wild spirit at heart, they are trainable and take to living amongst intelligent folk with enough success that they are only occasionally banned (often due to their poison) from some civilizations.

A tame and trained tatzy lives for 2d6+8 years in captivity. Twice a year, adult female tatzies become reproductively viable and search out a mate. Tatzies go their separate ways after mating. Females lay 1d6 eggs per clutch, which are guarded in a nest. These eggs have a hard, blue-green shell. Eggs hatch after 30 days, and young tatzies reach maturity in 180 days, leaving their mother to strike out on their own. Captive raised tatzies are weened after 8 weeks. Young tatzies become reproductively viable at their second year.

A tatzy egg, being just a bit larger than a chicken egg, is worth 10 gp.

Occasionally, tatzies are raised as fighting animals for gambling operations. Due to their unusual nature, they are often taught special tricks (as per the rules for learning tricks described under Handle Animal. The special tricks are as follows:

Squeeze (DC 20): The tatzy attempts to employ a constricting grapple against a designated target as per a command. The tatzy gains the Improved Grab (Ex) ability for knowing this trick, allowing it to start a grapple as a free action without provoking attacks of opportunity. In addition, a tatzy may use this improved grab against creatures up to two size categories larger than itself.

Despite being a magical beast, the tatzy can be selected as a familiar. Tatzies grant their master the Hypnotic Eyes ability (as their own ability, DC equal to 10 + 1/2 the character's HD total + the character's Charisma modifier) as well as immunity to tatzy poison.