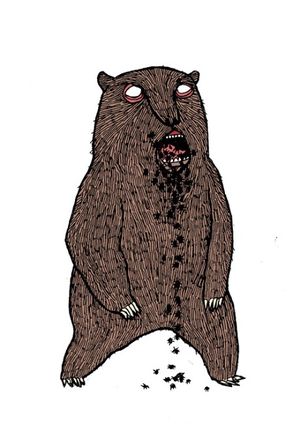 You will pray for death...

TerrorBears exist to lay waste to this world. In that sense they are like black holes, destroying any and all things unfortunate enough to fall within their proximity. Also like black holes, you will never find two TerrorBears in each others' presence. The result of this phenomenon is exactly what one might expect when an unstoppable chaotic force encounters its equal - absolute annihilation of all present matter. The craters on this planet have a variety of sources: meteorites, uncommon erosion, explosions, and TerrorBear showdowns. -- Excerpt from "Beasts of the Armageddon", Doctor of Theology, Keegan Whitledge

The TerrorBear is a unholy thing born from the depths of fear itself, superfically resembling a bear but certainly something more. A TerrorBear is approximately thirteen feet in height. The frame, limbs and head are all proportionately accurate in comparison to a common black bear ... this thing is just vastly larger. Its eyes are solid white with no discernible pupils, iris, cornea, etc. Most of the features of the face were standard affair as far as structure goes, but from its gaping mouth comes a steady stream of tiny black spiders that are constantly flowing out of the TerrorBear.

From where do TerrorBears arise? How many and where? None know, but given its joy of inflicting fear it can only be assumed that as long as a single creature has but a fear in his heart, somewhere a TerrorBear stalks...

The TerrorBear supposedly speak Abyssal, Celestial, Common, Giant, Infernal, Sylven, and Undercommon, but none have heard it ever speak more than its baleful howl...

The TerrorBear is a patient and cruel one. He will allow people to walk by in seeming safety, allowing them to believe they have not been seen, only to suddenly follow them once they turn and depart. It will hunt them for miles, not attacking, staring, waiting, until in paranoia they run.

And then one of them dies through overwhelming force.

And so slowly it picks off its targets one by one, allowing the subjects no rest and no escape, feeding off their fears until they all perish. Only those foolish enough to engage it in straight combat will cause the terrorbear to take a proactive approach to killing them, and even then it seems to revel in making their deaths slow and painful, often knocking them unconcious with nonlethal damage, and taking them back to its lair where others watch the captured party die, slowly, one... by... one...

Augmented Critical (Ex): The TerrorBear's claws and bite threaten a critical hit on a natural attack roll of 18-20, dealing triple damage on a successful critical hit.

Aura of Wrongness (Su): The presence of a TerrorBear is something that is inherently wrong with the world, and all creatures can feel it. All creatures in 1000 feet of the TerrorBear are sickened with no save. This effect takes place even if you are immune to sickening, and even mindless undead and constructs seem to naturally avoid approaching a TerrorBear if possible.

Baleful Howl (Su): It's not a growl. It's not a howl or groan. It's unlike anything I've ever heard emitted from the throat of any other animal on earth. Imagine the sound of one hundred men screaming as they drown in mud. Shrieks of horror, at various pitches, entrenched in a wet burbling noise. Now take that noise and slow it down drastically. That's about as close to a description as one can get to the constant baleful noise surrounding the TerrorBear out to 1000 feet. Those entering the area must make a DC 35 Will save or take 1d8 points of Wisdom damage. A successful save renders you immune for 24 hours, but if you are still in the area after 24 hours must make another saving throw against damage. Regardless of the result of the saving throw, anyone who attempts to sleep within the range of the baleful howl is subject to a nightmare spell with no saving throw. The TerrorBear delights in staying in range whenever its prey attempts to find sleep.

Burning Trail (Su): Everywhere it walks, it leaves twenty-inch-long flaming footprints. The fires within each impression don't seem to die. Any place walked over by the TerrorBear becomes lit with infernal fire, dealing 1d10 points of fire damage each round. The TerrorBear is immune to its own Burning Trail. The burning effect only goes out if the TerrorBear leaves the plane it is currently on, or 1 week has passed. Thus when a TerrorBear is in the area, all know it. Forest fires as a result of TerrorBears are common.

Destroy (Ex): Once every 1d4 rounds as a standard action a TerrorBear can choose to utterly destroy something within its reach. With a roar and a swipe of its claw, it bends reality to its whim. Against creatures, this deals 40d6 damage as a melee touch attack, and forces a Fortitude save DC 35 or be utterly destroyed or mutilated beyond repair at the TerrorBear's option. A successful save negates the destruction but not the damage, and if the damage kills the creature the body is destroyed or mutilated. This is a form-altering attack, not a death effect and so works on undead and constructs. Damage from Destroy counts as a force effect for the purposes of harming incorporeal and ethereal creatures, and for destroying walls of force, and it immediately destroys any prismatic wall and prismatic sphere type effects. Destroy can even effect things would shouldn't concievably BE destroyed, hitting a object or concept up to 1000 ft radius. A TerrorBear can destroy a waterfall, and the water will simply cease to flow in spite what gravity and sanity would otherwise suggest. Only the effect of a remove curse of caster level higher than 40 or a limited wish. miracle, or wish spell can undo the damage done to objects in this way. Attended objects get a Fortitude similar to creatures to resist destruction.

Frightful Presence (Ex): A TerrorBear can unsettle foes with its mere presence. The ability takes effect automatically whenever the TerrorBear attacks, charges, or makes an intimidating action. Creatures within a radius of 500 feet are subject to the effect if they have fewer HD than the TerrorBear. A potentially affected creature that succeeds on a Will save (DC 35) remains immune to that TerrorBear's frightful presence for 24 hours. On a failure, creatures with 20 or less HD become panicked for 4d6 rounds and those with 21 or more HD become shaken for 4d6 rounds. TerrorBear ignore the frightful presence of other TerrorBears.

Extraordinary Health (Ex): The TerrorBear always receives maximum hit points per HD, and an additional +200 hp by nature of its being.

Improved Grab (Ex): To use this ability, a TerrorBear must hit with a claw attack. It can then attempt to start a grapple as a free action without provoking an attack of opportunity.

Pounce (Ex): If a TerrorBear charges a foe, it can make a full attack.

Powerful Build (Ex): A TerrorBear's stature lets it function in many ways as if it were one size category larger. Whenever you are subject to a size modifier or special size modifier for an opposed check (such as during grapple checks, bull rush attempts, and trip attempts), it is treated as one size larger if doing so is advantageous. It is also considered to be one size larger when determining whether a creature’s special attacks based on size (such as improved grab or swallow whole) can affect the TerrorBear. If the TerrorBear ever used weapons, it could use weapons designed for a creature one size larger without penalty. The benefits of this stack with the effects of powers, abilities, and spells that change the TerrorBear’s size category. Its statblock reflects the chances due to powerful build.

Regeneration (Ex): Good aligned attacks and spells and weapons forged directly from gods of bravery and fearlessness deal normal damage to a TerrorBear. If a TerrorBear loses a limb or body part, the lost portion regrows in 3d6 minutes. The creature can reattach the severed member instantly by holding it to the stump. TerrorBears can survive with their heads cut off, but it stops the TerrorBear's progress for 3d6 minutes while a new head grows, often followed by the violent destruction of its beheader.

Summoning (Sp): A TerrorBear can summon any sort of bear (including owlbears) or spider (including swarms) whose HD does not exceed its own up to 5 times per day. It may not summon another TerrorBear, or rather it seems loath to do so as TerrorBears are highly territorial with their own kind.

True Seeing (Sp): All abominations have the spell-like ability to use true seeing at will.

Skills: A TerrorBear has a +4 racial bonus on Swim checks.