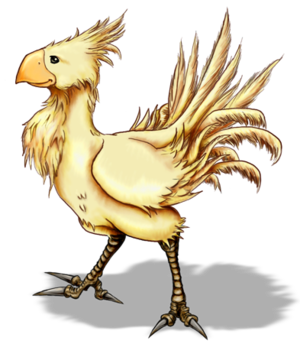 Around various fantastical realms, giant chickens known as chocobos fill the roles usually held for horses; mounts, work animals, racing, and other activities. These creatures are not typically intelligent but in rare cases, be it mutation by energy, magical interference, or other effects these creatures become smarter, more clever, and more cunning. The awakened chocobo is imbued with sapient intellect and personality, hampered only by their social status as beasts of burden. Though freaks in their species, they can often find companionship with adventurers who take in all sorts of beings.

An awakened chocobo is usually alone in their lives. They are a genius in a world of relative idiots, but their true potential only rises when they come in contact with civilization. As a result, the local civilization they are raised in imprints upon them and defines who they are, creating awakened chocobos who act like elves, who act like orcs, or any other manner of species out there. Due to their solitude and lack of peers, they sometimes seem disconnected from others or off in their own world. Some have spoken rumors of a whole chocobo civilization, deep in the forest and allied with some manner of fey-like flying bear-mole, but this is just a rumor.

Chocobos are large chicken-like avians as big as a horse, usually covered in yellow feathers. They are smarter than your average chicken, having the intellect and loyality of a trained dog. Riders and their mounts often gain a strong bond with each other. Their wings are useless for flying, acting as stabilization and brief glides, and their talons are nimble and flexible, with two talons forward and one positioned backwards for stability.

Genetically they remain chocobos and breed normally, though the result is not always sapient. Two awakened chocobos which breed produce another awakened chocobo, however, making them valuable. They reproduce as chickens, via eggs, and hatch after incubation. While the lifespan of a normal chocobo is comparable to horses (25 to 30 years) awakened chocobos live much longer.

Some awakened chocobos come in other colors than yellow, though the nature of this change in coloration is unclear.

Awakened chocobos often seek to use their intelligence and communication to break free from a life of servitude and become their own man, or bird anyway. Even so, not all begrudge their former masters, but simply enjoy the freedom to move as they please. Because they are not easily recognized as sapient, until it begins speaking or performing other unusual activities most cannot tell them from normal stock animals.

Awakened chocobo alignment is all over the board, though most start neutral and keep at it.

Chocobos stay within the plains, forests, and hills of various realms, but a few breeds have been associated with rivers, oceans, extreme mountains, deserts, and other exotic places. Curiously awakening by non-purposeful means occurs much more often upon ranches in semi-urban areas, though the cause of this anomaly is unknown.

Awakened chocobos become aware of themselves and things beyond, but not all are introduced to the concept of religion. While many have a feeling of "god" or things beyond, this feeling does not always translate into the adoption of any particular dogma.

Awakened Chocobos speak Wark, the language of chocobos. It is a combination of chirps, warbles, and whistling noises. As a requirement to communicate with others, they have also picked up Common by the time they are of adventuring age mentally and physically.

Awakened chocobos have no inherent cultural names, using the nicknames given to them by others instead.