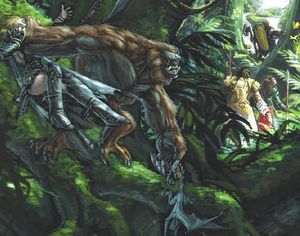 Our master wishes to grant you an audience with him. Your impudence is perplexing, since you should be bowing on your knees and begging to see him. But one thing is certain: you will come with us, whether you want to or not.

This hunched demon appears to be a gorilla, the skin of its arms and barrel-like frame straining with muscle. Its back legs are short and squat, almost to the point that they are atrophied, but this doesn’t seem to be a concern to the creature as it picks itself up and flings itself forward. As it moves, its fur shifts colors constantly to keep it almost invisible, but the rage-filled green eyes bearing down on you would be unmistakable even in complete darkness.

The savage and ape-like bar-lgura are the favored minions of Baphomet, Prince of Beasts. Initially created to navigate and defend his lair--the labyrinth known as the Endless Maze--their powers have been put to use by numerous other forces as scouts and skirmishers for demonic armies. Because of their unique ability (among demons, at any rate) to teleport with other creatures in tow, they are often employed as a means of kidnapping high-value targets or, during a siege, bringing additional troops in and out of an otherwise inaccessible location.

Bar-lgura prefer to move on their own, but they understand the need for cooperation, whether for the purposes of diversion or multiple abductions. Though stealthy, they are brutishly simple in combat and tend to make a big mess when discovered.

Bar-lgura are basically only particularly effective in melee, when their massive arms allow them to crush opposing targets. A bar-lgura always goes into battle with air walk and see invisibility active.

Aura of Primal Emotion (Ex): Bar-lgura project an aura of anger. The save DC for this aura is 13.

Camouflage (Ex): A bar-lgura may use the Hide skill even while observed.

Kidnap (Ex): A barl-gura may initiate a grapple as an immediate action (or a free action on its turn) on any manner of direct physical contact with the subject (getting struck with a manufactured melee weapon, for example, does not count.

Oversized Arms (Ex): Bar-lgura rarely need to resort to wielding weapons. But when they do, the freakish power of their arms serves them well. Their carrying capacities are equal to those of a quadruped creature two sizes larger than themselves. They are also able to wield weapons up to two size categories larger than they are and can catch rocks thrown at them (and return fire with them) so long as the rock is no bigger than one size category smaller than the bar-lgura.

Pounce (Ex): A bar-lgura may make a full attack on a charge.

Pummel (Ex): A bar-lgura that hits the same foe with more than one attack in a round can force that creature to make a Fortitude save (DC 19) or be stunned for 1 round. This DC is Strength-based.

Skills: A bar-lgura gains a bonus on Hide checks equal to its CR and double that bonus on Jump checks. Its jumps are also not limited by its height.