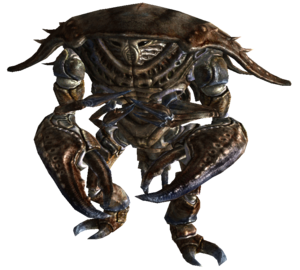 The brachyura are not a friendly lot...

Deep sea creatures from Gokia, they have a grudge against the surface world and would love to see it drown.

According to the brachyura, the Planet Gokia was once completely covered with water. Vast brachyuran empires spanned the globe and they were in a golden age. But it was then that the protective storms which has enveloped the planet begin to disperse, allowing the sun to shine it's cruel bright gaze. Thus the waters did recede and land was born. As the brachyura puzzled at the events they did not see the beings of land spring forth in number, they did not notice the land growing, the deserts expanding, and the storms weakening until it was far too late. Realizing that the beings of land were constructing buildings, terraforming the world, and other unknown terrors, they sought to take back the land that the landwalkers had stolen from them. And so they moved against them...

The battle was long, but ended in victory for the landwalkers. Humiliated and defeated the brachyura slunk into the deepest abyss to hide and regroup. And so filled with religious zeal and a desire to take back their slowly drying planet, their civilization began a long campaign against the gokiburi upon the land. So goes the story they say to explain the racial hate for their insect kin. While they are not without reason or ability to debate, the brachyura feel that, be it now or be it later, one day the gokiburi must leave the world and return it to the rightful owners. While brachyura are rarely seen off the Gokia homeworld, when they do they have mixed feelings for other races. They tolerate with reluctance the landwalking races of other worlds, wondering how they can stand such arid environments, while actively enjoying the company of other aquatic beings and trying to convince them to turn all worlds into water planets.

The brachyura are a race of crab-people whose true form is a sort of mollusk inside their hard exoskeletons. It is naturally occurring organic power armor of sorts, allowing them great strength and, more importantly, the ability to leave their deep water homes and walk the sunlit land, if only for brief periods of time. It is said that when the war first begun, the gods blessed their original carapaces with this new, combat worthy form.

They possess two powerful claws and four smaller pincer arms. The claws cannot hold weapons, but the pincer arms can, though they are weaker than a normal human hand. Their face is actual a sort of mask, filtering the strong sunlight and protecting their moist albino faces away from the sun and dry air. When feeding, a brachyura briefly opens his mask, revealing two bulging eyes, gills starting from the chin down, and a lamprey mouth covered with tentacles.

The brachyura tend to be a surly, serious lot. Unless they have somehow been isolated, most brachyura have been given the dogma that the land is bad and the water is good, and take their prejudices with them. They have a strong religious pantheon they believe in, with society breaking down into those who work, those who preach, and those who fight, and it is the fighters who are the ones who have the means and reasons to surface most often.

Even when isolated from their teachings, it is said brachyura are bull-headed and difficult to convince once they have put their mind to something. "It will happen no matter the consequences" seems built into their genes.

Brachyura raised by their own tend to be neutral evil, while those with better raising stray towards true neutral. Their stubbornness is tainted with considerable difficulty working with others, as might often makes right.

The brachyura live underwater, and so on the surface they are there on a mission, temporary, for the surface is as comfortable to them as a human who must stay in his space suit for extended periods of time.

The brachyura have a pantheon of gods relating to the elements which "secure their planet", Xolotl the God of Storms and lord of all things war, Necoc Yaotl the God of the Deep Darkness and it's mysteries, Tlazolli the God of Sea Beasts and natural disasters, and Mayahuel the Goddess of Wealth and Fortune, the Golden Age robbed from them shall be their again. Even non-clerics tend to be fanatic with their chosen god. There is a fifth worshiped being, Kukulkan, who is a god yet to be born and who shall bring about the apocalypse upon the landwalkers. However faith in his prophecy is strong enough that clerics can receive spells from this 'god'.

In a strange curiosity, brachyura speak a dialect of Aboleth, possessing the necessarily mouthparts and number of effective tongues to bellow it's infernal chorus. How the brachyura learned aboleth, a language of a creature alien to their seas, is unknown. It is suspected aboleths had their slimy tentacles somewhere in the ascension of the brachyura race. Out of necessity, those brachyura who travel also speak common.

The names of the brachyura have been best described as "the sound of people drowning". It is a horrid noise, and more often than not a brachyura will end up picking up a nickname the surface people have given it.