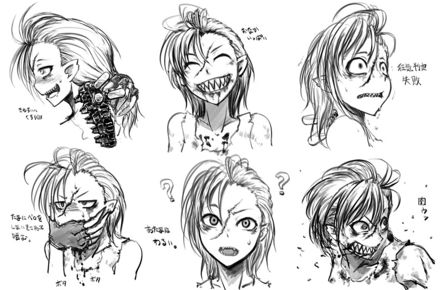 It is said that there was once a small island of humans who became threatened by the growing power of outside forces. Bullying turned to violence, and violence turned to war, but the island's inhabitants had no chance and their opponents were as powerful as they were cruel. As their numbers dwindled and the war transformed into a genocide, a small village of survivors made a pact with the Doresain, King of Ghouls. For the survival of their people they desired to acquire the strength of their enemies, and so the wish was granted. Their bodies were twisted, their souls tainted, and a great hunger filled them soon. When one of the enemy warriors fell in battle and the carib survivors leaped upon him their purpose was finally known, for after the grisly feast which occurred on the still-warm body they gained the warrior's strength. And then another. And another. At the end of only three months the genocide had reversed itself and only the carib remained. They returned to their island, but they continued to hunger, and the hunger did not abate through the generations.

The carib live a split life these days. After the carnage, many carib were horrified at what they had become while others delighted in their success. The carib thus split, leaving vile demon worshiping carib on their island and regretful but hungry exiles to walk the earth. As time passed and the island's location was forgotten with time caribs became villains, often confused with actual ghouls, and most legends claim they were an island of undead to begin with. For some, they carry on the dark traditions of their ancestors while others either reject them, or are unaware until they come of age and gain the hunger for sentient flesh. As such their personalities can vary, but all come off as predatory and threatening regardless if they mean to or not.

The carib look like humans with often more wild features and unkempt hair, slightly gray pallor, wide eyes, and more importantly a mouth full of sharp shark-like teeth. Their teeth are replaced constantly like the sharks they resemble, and are perfect for cutting through human flesh and bone. They trend toward thin lankier forms with pronounced spines and other bones, but are by no means undead.

Those aware of the carib's past do well to reject them, for they are monsters, demons in human skin. As such even evil carib do well to hide their nature, and wrap themselves in positions of respect and authority to avoid people questioning these "upstanding noble citizens". The more they have to hide, the better they try to conceal themselves.

They have a unique relationship with Gnolls, given the relationship of Doresain and Yeenoghu. They often live in the same areas and work together.

Carib can be any alignment, but trend towards chaotic due to their urges and the followers of the original demon worshipers are strongly chaotic evil.

The carib race has spread out over time into human lands everywhere, but many prefer tropical areas as their original homeland.

The carib either do not follow any particular religion, or worship demons and especially Doresain the King of Ghouls. Those aware of their origins but seeking to reject them may take up a religion, but most feel particular judged or wary of outer planar forces and try to avoid the divine when possible.

Carib possess human names according to their region.