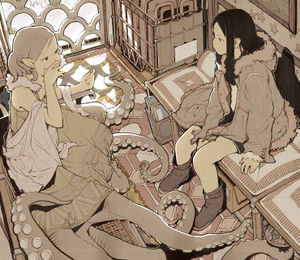 A cecaella relaxing with humans in a seaside hotel...

Also known as octofolk or sea witches, cecaella are mermaid-type creatures whose lower half is that of a squid or octopus instead of a fish. They have greater land mobility their their fish-tailed cousins, and are often seen intermingling with coastal town folk.

If merfolk are the elves of the sea, then cecaella are the dwarves, avoiding the playful feylike mischief of their other kin in favor of progress and success, growth and security. While hardly as stubborn or blunt as dwarves, cecaella are generally resentful and jealous of merfolk. They feel they provide all the work and ensure the safety of the sea against its many threats such as the sauhagin, and merfolk do little but waste their time in the sea. For that reason quite a few cecaella do not get along with the merfolk and, with their often intense focus upon the magical arts, are seen as suspicious and untrustworthy by merfolk in kind.

Cecaellans love civilization, and enjoy jewelry, ornate clothing, and other baubles and artifacts which display a society able to create things that only socital and technological or magical advancement can bring.

Cecaella have the upper body, arms, and head of a fair-featured human, and the lower half of an octopus or squid, hosting anywhere from 8 to 12 legs of various colors and patterns, and often adorned with sucker-grips on their bottom. Because of the presence of actual legs, they may walk on land, ablit slowly. They still must stay moist and shun dry environments. The lower half is known to alter its pattern and hue in times of great emotion, and the cecaellan language actually depends on subtle pattern changes for purposes of tone and emphasis in their language. Non-cecaellan speakers are said to always sound "flat and boring" to listen to.

Though the cecaellas have a troubled but non-hostile relationship with merfolk, they often join forces against their common foe, the sahaguin. Many are the sahaguin, the true masters of the ocean, and the cecaella would love to push them back and have an age dominated by a more kindly and productive race, as humans have done with the surface world. On that point, cecaellans do appreciate the surface and most of its inhabitants, especially humans and dwarves which seem progress-oriented in whatever tasks they set of to. They hope to use human history as a template as to set their own story.

Cecaellans have a strong presence in ports and trade towns, where they act as intermediators between the surface and ocean kingdoms. They have gained the moniker of "sea witch" given the race's large focus on magic. Where humans, dwarves, and gnomes have advanced in machines the cecaella attempt to do the same through magical mastery.

Cecaellans can follow any goal they wish and even the most chaotic cecaellan often has a goal in mind. Cecaellas are any alignment, but are in general neutral.

Cecaellans generally populate in two areas... along the coastlines where surface interaction is plentiful, and deep in the dark trenches of the ocean, where the safety of the trenches allows them to perform their own thing without undue attention from sahaguin or merfolk alike. They are also found in small number in merfolk communities.

Cecaellans follow a multitude of gods and goddesses, and do not seem to have a unified origin story or diety associated to their race. Several cecaellan scholars have made it their goal to research such things. Lacking information, most fall into worship of the merfolk deity Eadro.

Cecaella speak Common, Aquan, and Cecaella, a language based on Aquan but a unique dialect of its own.

Cecaella favor names which begin or end in vowels, or both. Names are often used from the local surface environment, with the idea that it would make ocean to surface relations smoother.