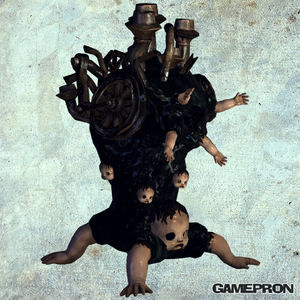 The king of corruption, composed of an array of howling faces.

A massive pile of sludge towers over you, crowned with an array of pipes, gears, and burning smokestacks and step upon a foundation of four stubby, arm-like feet. A giant doll's head protrudes from what you presume is between its legs, and dozens of smaller heads dot the cylindrical torso. Where a head should be, near the top, instead displays a mane of four arms devoid of a face. The constant howl it emits is enough to drive you insane!

The strongest of all the ruinous forms, the colossal ruin is formed out of dozens of ruins which have been bound together in a chaotic swarm of discord and suffering, its heart throbbing with infernal heat from its furnace. It is durable and heals rapidly from wounds and is able to bring pain at both close and long range. They lead armies of ruin beasts into battle in an effort to bring disorder.

The colossal ruin mixes its abilities as needed, fighting with much more intelligence than most ruinous beasts. At long range it releases Fire Orbs en masse while slowly closing distance. When closer, its powerful slams and grappling ability crush the life out of anything it touches. Only until all of its external faces have been destroyed does its real face manifest, allowing it to actually take damage. When this occurs, it begins to employ its flamethrower to disturbing effect.

Constrict (Ex): A colossal ruin deals damage equal to 4d6+22 plus 4d6 acid with a successful grapple check against a creature up to one size larger than itself.

Flamethrower Charge (Su): The colossal ruin can reveal massive pipes out of its torso which blasts a wave of hellfire. As a full-round action the colossal ruin can proceed to trample its opponents except it deals 4d6+22 bludgeoning and 16d6 points of hellfire damage, DC 26 Reflex for half if the attack of opportunity is not taken. Unlike most tramples, this is Constitution based.

The colossal ruin can keep up the flamethrower charge for up to 3 rounds. Whenever it ceases, it becomes staggered for 1 round as it recovers, and it's AC drops by -4 during the period. It must expose its real face to use flamethrower and during the subsequent staggering (see Legion of Faces), so it usually does not employ this ability until its head is already exposed.

Once its six lesser faces are destroyed, its real head appears from the void between its many arms. Typically it switches to heavy use of the Flamethrower Charge ability during this time. Only when its real face is exposed can the colossal ruin be harmed, all other attacks are taken by its lesser faces.

Meteor Herd (Su): As a full-round action, a colossal ruin can duplicate meteor swarm as a supernatural ability every 1d4 rounds, Reflex save DC 26. The saving throw is Constitution-based, and the fire damage is changed to hellfire damage.