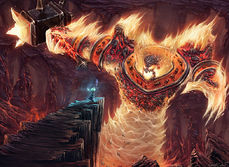 *: A core dreadnaught uses Power Attack at a minimum penalty of -30 (or half their base attack bonus, in case of advancement). This penalty and the resulting damage increase has been incorporated in the above statistics block.

Awakened from its age-long slumber, it upheaves itself from the sea of magma below with a primal roar, a pure manifestation of the smoldering core. Its features drawn in primeval wrath, its body afloat upon a pillar of roaring slag, the lord of the core raises its flame-etched gavel from fiery perdition to crush those who trespass within his depths.

A core dreadnaught is the ultimate manifestation of earth and fire, living within the deepest mires of eternal magma. When provoked or called upon to defend its domain, it rises from the magma like a self-contained cyclone of molten rock and lashing flame, drawing together in a vague, humanoid shape. A fully manifested core dreadnaught has a head and two arms, but retains its connection to the mantle of the earth. Although nigh-invincible in its own domain, a core dreadnaught cannot venture far from the source of its magma. Core dreadnaughts that breach the earth surface are virtually unheard of, unless in times of extreme volcanic or seismic activity or on highly volcanic worlds. Evil-aligned core dreadnaughts often make their homesteads on the hottest reaches of the Lower Planes.

A core dreadnaught's natural weapons and any weapon it wields is considered lawful-aligned and epic for the purpose of overcoming damage reduction. If the core dreadnaught is also either good or evil, its attacks become similarly aligned.

Primal Fire: Fire damage dealt by a core dreadnaught's attacks and abilities stems from primal fire, which ignores resistance to fire but is halved by immunity to fire.

Baptism of Fire (Su): Any time a creature or object hits, is hit by, or otherwise touches a core dreadnaught in or out of combat, it is dealt 4d6 points of fire damage. Furthermore, any of the core dreadnaught's fire spell-like abilities automatically gain the Molten Spell metamagic.

Damage from the core elemental's baptism is included in the above statistics block.

Control Magma (Su): Within a 200-foot-radius, a core dreadnaught can control the movement and the tides within its own body of magma at will. As a move action once per round, it may raise or lower the magma level by 10 feet per round. It may also launch a 60-foot broad wave of magma with a 10-foot high crest, that travels in a straight line at a speed of 60 feet per round.

Any creature exposed to a core dreadnaught's magma takes 20d6 points of fire damage, Reflex DC 50 half, and must make a move action at the start of their next turn to escape the magma or automatically take another 20d6 fire damage.

Heat Aura: A core dreadnaught radiates an aura of intense heat, making it difficult for any enemy to approach it. For as long as any creature remains within the core dreadnaught's natural reach, it suffers 20d6 points of damage every round. This damage does not stem directly from fire but rather from intense heat, and as such resistance to fire does not protect against a core dreadnaught's heat aura. Creatures with immunity to fire only take 10d6 points of damage, before any possible reduction from heat protection.

When manifested, a core dreadnaught's heat aura extends beyond its reach, creating an area of unearthly heat (see Heat Dangers, Sandstorm pg12) out to 1,000 feet. In this area, temperatures can exceed 180°F and are almost intense enough to make water boil. A character inside a core dreadnaught's heat aura takes 1d6 lethal damage and 1d4 nonlethal damage every round unless adequately protected.

Irresistible Blow (Ex): Using its unsurpassed physical might, a core dreadnaught can swing its gigantic hammer in a wide arc, smashing through the defense of every creature in the path of its weapon and blasting them back with enormous force. As a standard action, a core dreadnaught makes a single attack roll against every creature within the area of a 60-foot cone. Creatures hit are effectively bull rushed (at a +45 check modifier), and are thrown back 5 feet for every 5 points that the core dreadnaught's check result beats the defender's check result. Any creature moved by this ability is dealt 2d6 points of bludgeoning damage for every 5 feet they were pushed back (plus 4d6 points of fire damage from baptism).

Upon the core dreadnaught's death, it automatically unleashes a maximized nova. It is consumed utterly within the blast.