This is a monster from Liber Demonica. You might be looking for the dretch. 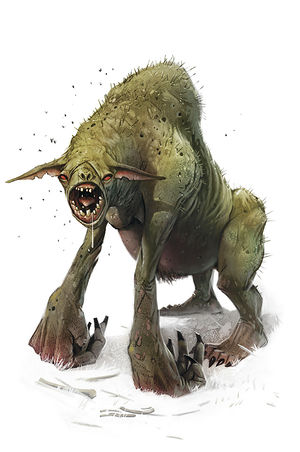 Go forth, my minions. It matters not whether you live or die; progress demands sacrifice.

Your opponent seems more pitiful than frightening at first glance, a hunchback-like monstrosity about the size of a dwarf with arms nearly as long as its body, forcing it to lope along on all fours like a beast. Its distended mouth is full of cracked, yellowing teeth, and its red eyes glare at you with unabated loathing.

As far as demons go, dretches are pretty low in the pecking order. In combat, they are sluggish and stupid, their combat abilities simply hindered by a lack of Abyssal energy. It has been theorized that this is a result of souls who have refused to totally accept their lot as demonic creatures, resulting in a fractured mind but an incessant refusal to wholly accept the changing power of the Abyss.

Most who have fought a dretch would likely contest this theory, given that the demons are as a whole essentially as cruel as their superiors. But their brains are primitive almost to the point of ferality, suggesting that they can be easily manipulated to commit just about every atrocity imaginable.

Although dretches cannot speak, they are capable of communicating telepathically with any creature that speaks Abyssal. Even this form of communication, however, is primarily only used to acknowledge orders given by other demons.

Dretches are rarely a challenge for the competent adventurer, thus encountering one by itself is a rare occurence; they attack in groups in the hopes of overwhelming foes with sheer numbers.

Aura of Primal Emotion (Ex): Dretches project an aura of fear. The save DC for this aura is 11.

Bristles (Ex): A dretch’s skin is covered with wiry hairs that deal additional damage. A creature struck by a dretch’s claw attack takes an additional 1d4 points of damage (this damage is considered the same type as the claw damage, either piercing or slashing at the whim of the dretch). A creature that attacks the dretch with a natural weapon or melee touch attack also takes this damage.

Bunching (Ex): A dretch may share spaces with up to two other dretches, and each gains a +1 bonus to attack rolls and Armor Class per dretch sharing a space with them.

Call for Backup (Su): Once per hour, a dretch may summon another dretch as a standard action. The summoned dretch appears in the same square as the dretch that summoned it, and both immediately gain the benefits of the bunching ability. A dretch summoned in this fashion or by another source cannot use this ability for 24 hours.

Filth (Ex): A dretch lives a constant existence of squalor, and is thus immune to being sickened or nauseated.

Spell-Like Abilities: 1/day—scare, obscuring mist. Caster level 2nd. The save DCs are Charisma-based and have a default DC of 13.