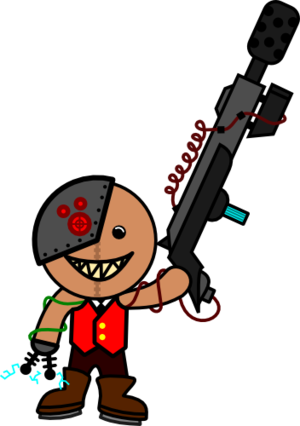 The electron gun is one of several alien weapons developed by the gokiburi. It fires a tiny metal needle, which has little damage potential itself, but carries a powerful charge and links the gun's electric energy to the target and strikes them, vaporizing the pin and the target it is embedded in. The needles come in ammo cases of 50 shots, and the nature of the electric damage is mundane in nature generated by the gun itself.

As long as it holds ammo, it automatically reloads as a free action. Loading a new needle case of 50 shots is a full-round action that provokes attacks of opportunity. You must use two hands to fire the electron gun correctly.

Electron guns are automatically masterwork by their construction. Gokiburi treat the electron gun as a martial weapon.