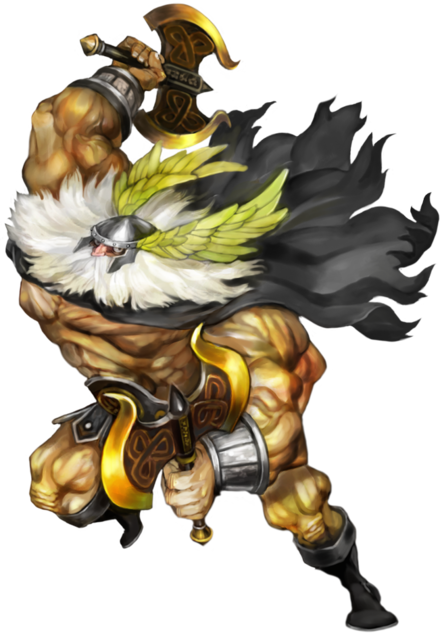 Dwarves and giants have never been friends. Its a conflict of territory often, with both races claiming the mountains, hills, and caves and causing each other trouble. But as any intermixing of cultures, even the violent ones, some may result in a bond of love and the creation of children. The children of dwarves and giants, the result is something of a giant dwarf (as nonsensical as that seems).

Fullangr are as big in ego as they are in body, and they like to do everything to the maximum and with gusto. They call it pride, and others may call it hammy acting. Whatever personality or role the fullangr assumes they like to assume it with as much passion as an artist and his art.

Fullangrs range from 6 to 7 feet tall but possess dwarven, not human, proportions and as a result they seem far bulkier and larger than they actually are. They seem to take largely after their dwarven heritage, though small signs of giant blood can be found depending on the breed such as retaining a storm giant's purple skin, a fire giant's flaming red hair, or other aspects. Not only go they have dwarven proportions but their proportions themselves seem exaggerated. They are not merely wide, but as wide as a truck! They are not merely muscled, but are built like bodybuilders! They don't merely have beards, they have glorious lion manes! It can even pose problems if they end up with massive shoulders and fists but tiny feet and head.

Fullangr breed true, but they are fairly rare. They can breed with giants or dwarves equally and the child is either a member of the other race or a full blooded fullangr.

Because dwarves and giants typically don't get along, the children born from these unions are typically frown upon. In dwarven societies they may be accepted only after much trouble and considerations, while giant tribes may accept them based on the personality of the tribe and on a case by case basis. Those that don't lose hope in others often set out as adventurers, for what else would accept them and what else brings as much gusto to their lives?

Fullangrs can be any alignment, but whatever alignment they are they shall do it with greatest effort.

Fullangr typically hail from the mountain (and as a result the most common type come from giant breeds which live in mountains). They come from lands rich in dwarven and giant conflict or integration.

Fullangr typically ascribe to the local pantheon of where they were raised, typically dwarven gods.

Fullangr names trend towards the nature of where they grew up, either giant or dwarven, though to many outsiders some may claim both have a Nordic feel to them. If not that, so the stereotype goes, some claim they take names which sound simply extreme like HACK BLOWFIST! SLAB SQUAT-THRUST! FLINT IRONSTAG! And more. In all caps, of course.