Iron Tide [Fighter] Prerequisites: Power AttackBenefit: While accepting at least a -2 penalty to the Power Attack feat, you may force any foe you hit with a melee attack to make a Fortitude save (DC 10 + your Strength modifier + 1/2 your BAB + penalty to attack you take from Power Attack). On a failed save, you may move them one square in any direction away from you as long as that square that is unoccupied and the square they end in can support their weight.

After you move the foe you may also move, but you must end in the nearest space that fulfills these criteria: it is unoccupied, it can support your weight, and its distance from the foe is equal to your distance from the foe prior to activating this feat. If a foe is affected by this feat, they are immune to it until the start of your next turn.

Movement due to this feat does not provoke an attack of opportunity, even from abilities that would normally allow one to take AoOs for any kind of movement. This feat may not be used when making attacks of opportunity. For every 5 levels you possess, you may move your target up to an additional square, up to a maximum of 25' at level 20. Example: Phil, with a strength of 18, a BAB of 6, and a Power Attack penalty of -2, attacks the enemy barbarian and hits. The barbarian must make a DC 19 fortitude save (10 + 4 for Phil's Strength modifier + 3 for half of Phil's BAB + 2 for Phil's Power Attack penalty) to avoid being moved back. The barbarian fails this save, and Phil decides to push him directly backward, stepping forward to meet him. Neither Phil's movement nor the barbarian's movement provokes an Attack of Opportunity. 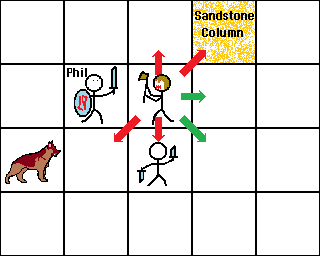