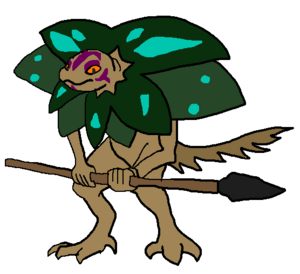 Are you food too?

The lacrimon were originally native among the savage temples and jungles of ancient humanoids, where the poisoned bodies of war victims were surrendered to the gods upon great pyres and after bloody sacrifices. Born on a carnivorous diet, when the civilization fell the hungry early lacrimon was forced into an ambulatory existence. While most assume plant creatures to be slow, plodding, or peaceful, the lacrimon are a species who survive the brutal jungle environments. This makes them proud hunters, warriors, and trappers. It also won them no favors with others, as many assume them to be barbarians.

Lacrimon think in short terms of how to ensure their basic needs, and often become puzzled on what else they need beyond their own basic comforts and securities. Those who have escaped the primitive living lifestyle usually turn to art, transforming their utility tools and weapons in armor into ornate but functional creations. They also keep an oral tradition of history through song and dance, these stories abstract and metaphorical but hauntingly beautiful.

A lacrimon is a plant based creature with a humanoid body with digitigrade legs, lizard-like balancing tail, and hunched over form that makes them look like a cross between a hunchbacked man and a velociraptor. Their bodies are covered in leafy scales, and a mane of petals around their neck. Their faces are marked with stripes, spots, and other colors each unique to each and every lacrimon, with large almond shaped eyes and a anthromorphic serpentine visage. When startled, angry, or intimidating its mane stands up and expands revealing the full pattern upon it, typically decked out in the vague shape of a predatory face. When its crest is expanded, it is often a sign that the lacrimon will spray its opponent with its painful stinging toxin.

Lacrimon are often found perched within trees, soaking in the sun above the treeline and using the high ground to drop upon prey and devour them. When needed they can root themselves to soft fertile soil using the root-like hairs that line their tails.

Lacrimon are usually territorial and insular, but circumstances can sometimes displace a lacrimon from its native home. In these circumstances wandering lacrimon scatter to the winds, each to settle a new area and attempt to make a new tribe of their own. Others may travel in search of other tribes for the purposes of love and reproduction. And some wander as a means of finding purpose after finding stability in life.

The brutal life of a lacrimon promotes non-lawful behavior, though it is often not unheard of lacrimon holding tight to their own cultural concepts of honor.

Lacrimon were born within the jungle, but are hardy enough to exist in many places. They prefer places of great sunlight, water, or bloodshed, or all three in equal measure.

Lacrimon religion is obscured, for while the songs and dances of ancient histories remain intact, they have been altered and modified over 1000 generations and obscured by metaphor and myth. Many tell distorted versions of ancient gods of bloodshed and sunlight, tales of wars between ancient titans, and great cycles of nature.

Lacrimon names can only be described as "Aztec" in nature, and are difficult to spell.