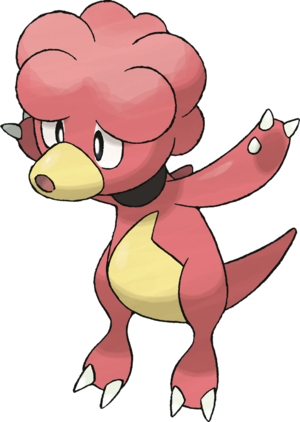 This small, unassuming critter eyes you warily as you approach. As you get closer, it suddenly spits fire at you!

Magby is the juvenile form of the Magmar line.

Magby isn't especially strong, but trifling with it isn't a good idea, as it can cause some nasty status conditions.

Magby's flare attack is a lava dribble oozing from its mouth, treated as a melee touch attack. It is a secondary natural weapon (taking the appropriate penalty) and its attack and damage rolls are influenced by Magby's Constitution instead of its Strength (which isn't really a good thing for Magby, as its Constitution is rather low).

Flame Body (Su): Magby's body is very hot. Anything striking it with an unarmed attack or natural weapon takes 1 point of fire damage per HD Magby has (5 for the sample Magby) and must succeed on a Reflex save or suffer a burn. The save DC is equal to 10 + ½ Magby's HD + Magby's Constitution modifier (10 for the sample Magby).

Egg Move: Magby may hatch knowing one of the following moves:

Smog (Sp): Magby can cast smog as a spell-like ability twice per encounter (DC 13, Charisma-based). Smog is identical to stinking cloud, except that it poisons creatures instead of nauseating them. All creatures within the smog cloud take 1 point of damage per caster level per round, and during each round that they remain, they must succeed on a Fortitude save or suffer 1 point of Constitution damage, then suffer 1 more point of Constitution damage every 2 rounds thereafter until the end of the encounter. Success on a primary save prevents secondary damage from being incurred, with no further saves needed (assuming that the creature in question leaves smog's area of effect before another round of primary damage is potentially incurred). Failure on even one primary save allows secondary damage to occur until the effect is lifted (by magic or by the encounter ending). Secondary Constitution damage can be prevented by a successful Fortitude save against the same DC as the initial one, but each round of secondary damage requires a new save to prevent (success on a secondary save does not end the effect). Hit point damage caused by smog is not affected by victims' saving throws. Constitution damage can be incurred once per round of exposure, but secondary Constitution damage does not stack, even if the primary Fortitude save is failed several times. Both the hit point damage and Constitution damage are considered poison effects, so all bonuses and penalties to saves against poison (such as a dwarf's racial bonus) are applicable to smog, and creatures with immunity to poison are unaffected regardless of how poor their Fortitude saves are (and poison-immune creatures don't take hit point damage either). The Constitution damage can be stopped by neutralize poison or any other effect capable of curing a poison before it inflicts its secondary damage. delay poison does not end the effect of smog outright, but it does grant affected creatures temporary poison immunity with respect to smog, and creatures that are already poisoned do not take secondary Constitution damage for as long as delay poison's effects last. Magby's caster level for smog is equal to its Hit Die (caster level 5th for the sample Magby). Smog is treated as a 3rd-level spell, and is a [Poison] effect.

Leer (Su): As a standard action, Magby may attempt to unsettle opponents and make them open up their guard a bit. Its menacing stare affects all targets within a 30-foot cone that meet Magby's gaze, forcing them to succeed on a Will save (DC 11, Wisdom-based) or gain damage susceptibility 1/physical for 5 rounds. This is treated as a gaze attack, and thus can be avoided in any of the same ways that a gaze attack can be, but it is not continuously active; Magby has to consciously choose to use it. (It's just like a vampire's dominating gaze in that respect.) Leer is a [Fear, Mind-Affecting] effect, with all of the capabilities and limitations that are implied by said descriptors (in other words, Magby's wasting its time by trying to use Leer on a mindless creature or a paladin).

Ember (Su): Magbys have a very minor breath weapon; they can breathe fire. A Magby's ember attack strikes in a 10 ft. line and deals 1d4 + HD + Cha mod in fire damage. Creatures in the area may halve the damage on a successful Reflex save, DC = 10 + Magby's Charisma modifier + ½ Magby's Hit Dice. Magby may not use Ember for 1d4 rounds after having used it. The sample Magby's Ember attack inflicts 1d4+5 fire damage with a save DC of 12. This is a [Fire] effect.

Smokescreen (Su): As a standard action, Magby can fill a cylinder centered on itself with a 5-foot radius and 5 feet high with with smoke from the flames from its mouth, similar to an obscuring mist effect. Fire-subtype creatures can see further through the smoke; for them, creatures 10 feet away have only concealment and creatures 5 feet away are not concealed.

The smoke dissipates after 3 rounds. This is a [Fire] effect.

Faint Attack (Ex): Whenever Magby succeeds on a Bluff check to feint an opponent, it automatically makes a slam attack on that opponent which cannot miss. It still makes an attack roll to determine whether or not the attack is a critical hit. This is a [Dark] effect.

Fire Spin (Su): As a standard action, Magby can make a ranged touch attack against a single creature within Close range. If it hits, the target takes 1d4 fire damage, and is also entangled. It takes an additional 1d4 fire damage every round that it remains entangled. The target may be entangled by this effect for up to 5 rounds, after which it is automatically released. This is a [Fire] effect.

Clear Smog (Sp) Magby may cast stinking cloud as a spell-like ability twice per encounter (DC 13, Charisma-based). In addition to its normal effects, this stinking cloud attempts to remove all stat boosts and other beneficial magical effects on creatures caught within it, as greater dispel magic, with a caster level equal to the caster level of the stinking cloud itself (caster level 5th for the sample Magby). This is a [Poison] effect.

Confuse Ray (Sp): Magby may cast confusion as a standard action; however, instead of its normal targeting mechanism, Magby's confusion is a magical ray (that is, a ranged touch attack). If Confuse Ray connects, automatically confuses the target with no save allowed. If Confuse Ray scores a critical hit, the target becomes permanently insane, as the insanity spell. This move is a [Ghost] effect, but can affect Normal-type Pokémon.

At 6 HD, Magby learns Fire Punch (Su). When making a slam attack, Magby can wreath its fist in fire energy. This adds 1d4 fire damage to its unarmed attack and (assuming Magby hits) forces the target to make a Fortitude save against being burned. This attack is an ordinary slam attack in all other respects. The Fortitude save DC is Strength-based. This move is a [Fire] effect.

At 6 HD, Magby may evolve into Magmar. This is an overall power boost, but does delay its access to some of its advanced techniques.

At 7 HD, Magby learns Lava Plume (Su). As a standard action usable every 1d3 rounds, Magby may emit an explosion of magma that affects all squares within 30 feet per 10 HD (minimum 30 feet) and does 1d6 fire damage per 2 HD Magby has. A Reflex save (Charisma-based DC) is allowed to halve the damage. Failure by 5 or more on the Reflex save results in burning. This is a [Fire] effect.

At 7 HD, Magby learns Sunny Day (Su). Magby may replicate the effects of the Drought feat as a standard action; however, the sunlight caused by Magby lasts for only 5 rounds.

At 8 HD, Magby's Ember attack is replaced with Flamethrower (Su). A Magby's flamethrower attack strikes in a 20-ft. line or 10-ft. cone and deals 1d4 fire damage per HD plus Magby's Charisma bonus. Creatures in the area may halve the damage on a successful Reflex save, DC 10 + Magby's Charisma modifier + ½ Magby's Hit Dice. Magby may not use Flamethrower for 1d4+1 rounds after having used it. This is a [Fire] effect.

At 9 HD, Magby learns Fire Blast (Sp). This is an extra-potent fireball with no damage cap and an explosion radius of 15 feet per caster level. However, Fire Blast can only be used once every 1d2 minutes, and Magby's Fire Blast has d4 damage die instead of the d6 fireball uses. It is a [Fire] effect and (for Magby) the equivalent of a 4th-level spell.