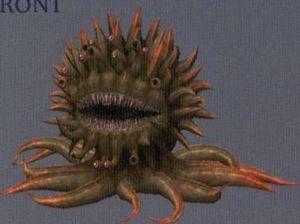 A terrible smell is coming from this pit of refuge, and you swear you see something move underneath the sludge. Suddenly a swarm of flailing tentacles rises from the muck, dragging along an over-sized toothy grinning mouth with thousands of primitive eyestalks. Its breath smells even worse than the trash about it.

Malboros are horrible plants which grow from spores planted in the most vile sewage pools imaginable. They absorb the surrounding decay's poison and heat, growing into horrible grinning mouths who move on countless mobile vines. They have poor eyesight, made up by the sheer number of eyes they possess, and keen ability to pick up vibrations. Rotting meat makes an excellent meal, and moving too close to a Malboro's sludge pit is bound to draw its attention and hunger.

While most are neutral, due to their horrible nature many are born in horrible, tainted environments such as battlefields and mass graves. Such malboros are almost always neutral evil.

A Malboro is not too bright, but smarter than the average animal and understands the concept of ambushes. It may position itself to pop up and surprise its prey, chasing it to drive it to its sludge pool or another natural hazard where it can gain an advantage. If taking a lot of damage, it moves to its pit and plants itself to hold its position. A malboro often opens up the fight with its Bad Breath, picking off opponents by whoever is weakest or most dangerous.

Bad Breath (Ex): Malboros can breath a cloud of utter decay every 1d4 rounds into a 30 ft. cone, duplicating the effects of a Contagion spell, but each target afflicted rolls randomly for their disease (1d8, with a result of 8 being "roll twice"). The save DC is 21, and is Constitution based.

Eye Rays (Ex): Malboros can squirt streams of acid from their multiple eyestalks, some which are dedicated to spraying over vision. It is a natural weapon which does not provoke attacks of opportunity.

All-Around Vision (Ex): Due to the sheer number of eyes, a malboro cannot be flanked.

Stench (Ex): Even when not breathing, malboros stink to high heavens. All living creatures (except malboros) within 30 feet of a malboro must succeed on a DC 19 Fortitude save or be sickened for 10 rounds. The save DC is Constitution-based. Creatures that successfully save cannot be affected by the same malboro’s stench for 24 hours. A delay poison or neutralize poison spell removes the effect from the sickened creature. Creatures with immunity to poison are unaffected, and creatures resistant to poison receive their normal bonus on their saving throws.

Plant Roots (Ex): When in foul environments such as a garbage pile, a malboro can plant its roots as a move action. Its speed drops to 0 ft. and it cannot move, but it gains Fast Healing 10 while rooted.

Skills: The skin of a malboro changes color somewhat, allowing it to blend in with its surroundings like a chameleon and providing a +4 racial bonus on Hide checks. In foul and swampy settings, this bonus improves to +8.

Certain malboros which have grown up in especially toxic environments have mutated into something far more wicked. They are often found as leaders in clutches of spawning malboros, and often try to make deals with otyughs and other filthy races. They have the following differences from normal malboros.

Against status effects which prevent actions (such as paralysis or petrification), it can make a second save 1 round later. If successful it absorbs it, ending the effect, and immediately releasing a bad breath even if its cooldown has not completed.

Toxic Breath (Ex): Greater malboros can breath a cloud of utter decay every 1d4 rounds into a 60 ft. cone, duplicating the effects of a Contagion spell, but each target afflicted rolls randomly for their disease (1d8, with a result of 8 being "roll twice"). In addition to the disease targets take 16d6 points of poison damage, with a Fortitude save for half, and to negate the disease effect. The save DC is 27, and is Constitution based.