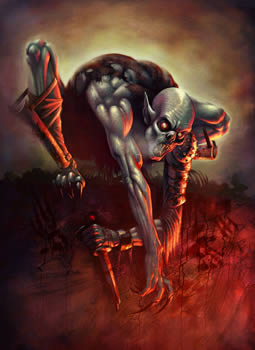 What about them? They're fresh...

A gaunt, wiry creature highly reminiscent of a ghoul a leaps from the darkness, its pallid gray skin tarnished black with Abyssal soot. As you stare in horror, it appears to wretch as though it is attempting a regurgitate something unpleasant. Suddenly, a long, tri-pronged tendril lashes from its mouth; even as it misses you, it veers off in with a quick change of direction and latches to the ground, pulling the creature forward and sending it rocketing towards you, claws poised to strike.

The ghoul-demon maurezhi are hunger demons, created to be the garbage disposal of the abyssal realms. With the endless conflict that spreads throughout the Abyss, corpses from non-demons pop up all the time, and rarely do anything other than fester due to the inability of the Abyss to absorb any of their power. With an endlessly rumbling stomach and the profit from their consumption of the dead, the maurezhi take to this grisly task with disturbing relish.

Initially created by the Ghoul King Doresain as a means of harvesting some benefit from corpses too ravaged by the dangers of the Abyss to be recreated as ghouls, maurezhi share traits of ghouls and demons to form a potent combination that has been highly valued by both Doresain and his successor Yeenoghu, who inherited the Ghoul King’s servants along with his title.

Maurezhi are tremendously capable combatants, preferring to devastate opponents with their claws after closing in quickly with their long, lashing tongues and magical abilities. They always enter battle under the effect of fly, shadow walk and deathwatch. Once they have defeated an individual enemy, they devour them if they have the time in order to gain a greater edge in combat.

Consume (Ex): As a full-round action, a maurezhi can feast upon a deceased or helpless creature (treat this ability for all intents and purposes as a coup de grace attack in this respect). Doing so also allows the maurezhi to gain a temporary increase in power, gaining all the benefits and drawbacks of gaining a single size category for one round per HD of the target creature. If the maurezhi consumes another creature while enlarged, it does not gain another size category; it merely extends the duration of the current effect. A creature must be of CR 3 or higher in order to gain any benefit from the consumption of a corpse.

Death Claws (Ex): A maurezhi’s claws are coated in Abyssal soot that flakes off into those it strikes, infecting their body and causing paralysis. A creature struck by a maurezhi’s claw attack must succeed on a DC 26 Fortitude save or be paralyzed for 1 round; any individual creature cannot be affected by this ability more than once per round. The claws also carry the effect of a greater dispel magic spell (using the maurezhi's attack roll in place of a caster level check). This save DC is Strength-based.

Deceased (Ex): A maurezhi is similar to an undead creature in multiple respects. It lacks a Constitution score, and its Charisma score effectively replaces its Constitution in all situations. It is also immune to all poisons, diseases, and death effects. These replace demon traits, but not general outsider traits.

Spell-Like Abilities: At will - chaos hammer, death knell, deathwatch, greater teleport, overland flight, Rien's rotting touch, shadow walk. Caster level 12th. Save DC’s are Charisma-based, and the default DC for any effect that requires one is 26.

Tongue (Ex): A maurezhi’s tongue is an exceptionally deadly and versatile appendage, possessing twice the maurezhi‘s normal melee reach. It allows the maurezhi to take a swift action to move a number of feet up to that increased reach. If the maurezhi hits an opponent with its tongue, it may make a trip attempt as a free action useable out of turn.