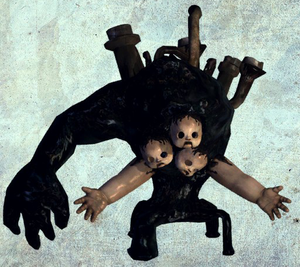 This lumbering brute is formed out of black runny tar, polution, and organic sludge forged into a rough, hunchbacked humanoid shape with four stumpy legs. It's muscular top half is adorned with two doll arms and one massive arm made of sludge sprouting from its back. The front of its body has three doll faces which cry in discordant rage as it sees you, the various pipes on its body bursting with flame as it charges your way!

A larger and fiercer form of Insidious Ruin, the Menacing Ruin somehow manages to be even more vile and dangerous. Where the insidious ruin is adorned with a horrible doll face, the menacing ruin has three, with a massive tar arm projecting lopsidedly out of its hunched back and two smaller doll arms which cross over its triad of faces. More intelligent but utterly consumed with hateful fury, menacing ruin are a serious threat to all living beings which come across them. They are difficult to take down at range, forcing most to engage the powerful beast in melee combat where they excel. Only by shattering its smaller doll arms does the defenses of the menacing ruin open.

Menacing Ruin are nearly impossible to harm with ranged attacks, and quite difficult in melee so long as they have their smaller doll arms intact. They switch between charge attacks and ranged attacks as needed, until their arms are shattered. Once their smaller arms break, they go into a range and stick purely on melee attacks, filled with unreasoning madness.

Defensive Stance (Ex): As a swift action the menacing ruin can adopt a defensive stance, which grants the menacing ruin DR 15/- and allows them to parry even magical ranged touch attacks with their Infinite Deflection and Reflect Arrows feats. However, they cannot charge in this stance. By breaking the doll arms of the creature, you can prevent the menacing ruin from using this stance. This can be achieved by a sunder attempt (arms hardness 15, 50 hp, half all energy damage except sonic), or by reflecting one of its fire orb attacks (see below). Once its arms are broken it enters an involuntary rage, loses its Infinite Deflection and Reflect Arrows feats, and switches to purely melee combat.

Explosion Fist (Su): Menacing Ruin are capable of releasing a wave of destruction by slamming the ground in front of them. They deal 1d6 fire damage per HD (8d6) in a 60ft line, with a Reflex save DC 18. The save is Constitution based.

Fire Orb (Sp): Menacing Ruin pluck a hardened brittle lump of sludge off their bodies, ignite it, and throw it at their enemies. This is a ranged touch attack which deals 2d6+double Str bludgeoning damage and +8d6 fire damage, with a range increment of 30 ft. Creatures get a DC 18 Reflex save for half. If the save is successful, the target can make an attack roll to hit the menacing ruin's touch AC. On a successful hit the target has deflected the projectile back at the ruin, which will immediately destroy its arms and deal damage to the creature.

Heavy Hitter (Ex): The muscular tar arm of the menacing ruin is especially powerful. It deals 2d6 + double Str in damage instead of 2d6 + Str.

Involuntary Rage (Ex): If its doll arms are destroyed (see Defensive Stance above) the menacing ruin enters a rage. It gains +4 Str and Con, +2 Will saves, -2 AC, and is unable to use its fire orb ability. It is subject to all the normal restrictions of a barbarian's rage, and stops at the end of the encounter.