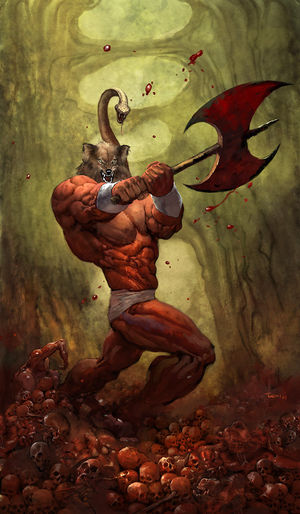 There is no escape from this prison that you call the Abyss. Resistance is futile.

A brown, canine head bursts through the veil of smoke, its teeth gnashing fiercely and releasing globs of spittle the size of a man’s thumb. As the rest of the demon’s form steps out of the fumes, you see a large and muscular humanoid form standing about 12 feet in height—coated in red, bristling fur—around which twists a constantly writhing snake, attached to the rest of the demon at the abdomen.

Molydei (singular molydeus) are the jailors of the Abyss, charged with hunting down and incarcerating or killing those who would challenge the established order. This seems rather contradictory given the chaotic nature of the realm itself, which is why the sending of a molydeus is considered an invitation into the ranks of powerful demons. Defeating it allows the target to be recognized as a significant power in the Abyss, and perpetuates the theme of constant change so prevalent in the Infinite Layers.

Because of their particular duties, molydei are held in high favor by Baphomet, who personally grants them power in order to fulfill responsibilities that match his portfolio. In battle, molydei are vicious and unrelenting able to push their opponents to the brink of death before finally striking a nonfatal finishing blow.

Aura of Primal Emotion (Ex): A molydeus radiates an aura of fear with a save DC of 26. Those who fail the save against this aura are made to cower helplessly.

Blessing of the Beast (Sp): A molydeus can draw power directly from the Prince of Beasts himself, manifesting as a limited wish spell useable once per hour.

False Swipe: When a molydeus strikes a blow that would be fatal, it may opt to knock the foe unconscious instead of killing them.

Fiendish Cut: A molydeus’ axe ignores any damage reduction or hardness, and its fire effects can ignore up to 15 points of fire resistance. In addition, the molydeus may also make melee attacks with its axe out to a distance of 20 feet.

Meteor Smash (Su): A molydeus’ axe strikes with a blast of flame, dealing 8d6 points of fire damage on each successful attack. Each of his attacks also carries the effect of a targeted greater dispel magic spell, with the attack roll substituting for the caster level check.

Snakebitten (Ex): The snake head that the molydeus possesses constantly moves and twitches, covering every angle and preventing the molydeus from being flanked or caught flat-footed. Once per round, as a free action useable out of turn, it may strike at a single opponent within the snake’s reach (which is twice that of the molydeus’ normal reach), dealing damage and forcing the opponent to make a Fortitude save (DC 28) against the molydeus’s poison. The poison deals 1d10 points of Constitution damage and has a Constitution-based save DC.

As a move action, the snake can spit a substantially large amount of venom at the target, dealing 16d6 points of acid damage and subjecting them to its poison.

True Sight (Ex): A molydeus sees naturally as though it were under the effect of a true seeing spell.