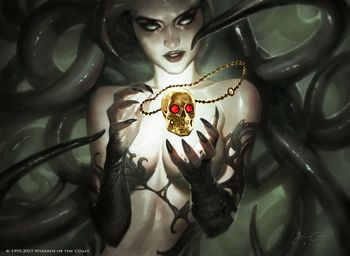 This evil sea witch has just finish crafting her phylactery for her future transformation..

A giant rose from the waves, hair of squirming tendrils and whose lower half blossomed into a web of even larger lashing tentacles which seemed to move of their own volition.

Just as giants exist on land, there are giants of the sea as well. The neria are the giants of mer-kind, and cephal neria are the most intelligent and tricky of them all. Instead of the mermaid-like fish form of their fellow siren neria, cephal neria have tentacles like a giant squid or octopus with tentacles for legs, and more in place of where hair should be. Their human upper halves come in many skin colors from normal earth tones, to blues, purples, and greens, and large bright eyes that shine with alien intelligence. Their skins are rubbery and their bodies seem to move with no regard to bone structure. In fact, their bones are little more than cartilage and hydro-static pressure, allowing them to contort their bodies into new and strange shapes and forms. This is their greatest ability; the power of disguise. Many cephal neria exist on or near the surface hidden as natural formations, large rocks, seaweed forests, and other terrain.

Cephal neria are very smart and many are schemers with complex and obscure plans. They are also loners with a competitive spirit, resulting in many rivalries between fellow neria and a constant drive to outdo each other. Cephal neria are typically self serving, and should not be trusted. They are not beyond twisting intent or outright betrayal if it suits their incomprehensible schemes. On the other hand, few have the intellect, resources, and influence of a cephal neria making them desired by those seeking their power.

A cephal neria speaks Common, Giant, and Aquan, and usually several other languages with their high intelligence. They are about 20 ft tall "standing" (32 ft from head to tail) and weighing 25,000 lbs.

Cephal neria prefer to fight on their terms, and so fights are usually rife with traps and dangers pre-set by them. Combined with their disguise ability, and cephal are master ambushers. They appear out of nowhere and decloak, immediately move in to grapple all they can, and then start casting spells on those remaining. Their multigrab ability allows a single cephal neria to take on an entire group singlehandedly.

Cephal neria usually multiclass into wizards to expand their magical abilities. Such cephal neria are known as sea witches.

Capsize (Ex): Cephal neria can topple ships up to one size larger than them, causing the ship to sway and possibly tip over. The cephal neria must make a touch attack at the end of a charge against a seafaring vehicle, and then make a special strength check (1d20 + BAB + Strength) opposed by the Profession (Sailor) check of the vehicle (+ or -4 for each size larger or smaller than Huge). If successful, the ship rocks violently dealing half the cephal neria's slam damage to all creatures in the vehicle and forcing balance against falling prone and concentration checks equal to the result for creatures on the ship. If you beat the opposed roll by 10 or more, the ship capsizes completely and turns upside down. A capsized ship is completely disabled, and while air trapped under the ship can keep it afloat for a few days or weeks, it is almost impossible to turn right side up. Eventually, capsized ships will sink and slip under the waves.

Chameleon (Ex): Cephal neria can change their bodies dramatically, changing color and texture to something radically different. They may make a Disguise check with a +10 racial bonus as a standard action. They can even disguise as radically different things such as terrain with a -10 penalty, or a -20 penalty if assuming terrain not vaguely shaped like their normal form. They do not take any penalty for assuming a form one size larger or one size smaller than normal.

Improved Multigrab (Ex): To use this ability, the cephal neria must hit with a tentacle attack against a creature two sizes smaller. It can then attempt to start a grapple as a free action without provoking an attack of opportunity. If it wins the grapple check, it establishes a hold and can constrict. Unlike a normal grapple, the cephal neria is not considered grapple and in fact the cephal neria can grapple one creature per tentacle without being considered grappled themselves (a total of eight simultaneous grapples). Using a tentacle to grapple prevents it from being used as a natural attack.

Pressure Resistance (Ex): Cephal neria are immune to the effects of high pressure.

Skills: Cephal neria has a +8 racial bonus on any Swim check to perform some special action or avoid a hazard. It can always choose to take 10 on a Swim check, even if distracted or endangered. It can use the run action while swimming, provided it swims in a straight line. They also count as a creature one size smaller than normal for the purpose of squeezing through small spaces.