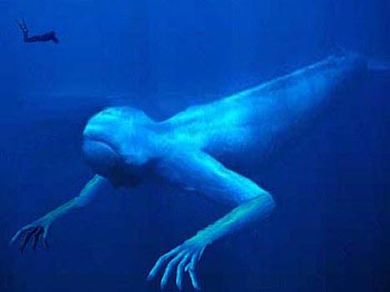 A rare image of a cetacea swimming in the depths. Its facemask is barely visible.

A colossal but undeniably humanoid shadow moves in the depths below you. The boat shakes as it rises, towering over you with its pale skin, a giant white mask gazing at you with a seven eyed pattern.

Just as giants exist on land, there are giants of the sea as well. The neria are the giants of mer-kind, and cetacea neria are the greatest of them all. One of the two descendants of the original primal oceanic neria, an old long forgotten race which spawned all neria. In these times, a great war broke out over an unknown cause. The cetacea won, driving the others into exiles into the depths and then... nothing. History for the primal neria stops, and they seem to fade away only to be replaced by the soft spoken and long dreaming cetacea. The cetacea embody passiveness, for they are subtle in all that they do. For as large as they are, they are difficult to find as they patrol distant waters and swim as massive depths, or even simply hibernate and are forgotten. Many have been surprised when an entire coral reef or part of an island chain wakes up and begins moving on its own, now grown on the back of a sleeping cetacea neria.

The cetacea neria are massive pale skinned giants which range from bone white to darker blue-grays, with humanoid upper halves and whale lower halves. Their faces are universally covered with their strange bone white masks which seem almost to be part of them, and expose no eyes, no mouth, indeed nothing. In spite of this the cetacea sees and eats plankton which seems to simply meld into the strange mask, and the mask can be removed. Those that see a cetacea's true face can never recall what they have seen, for it is something impossible and unfathomable. The closest descriptions have been "a hole", "nothing but light", "so many things watching", or even stranger descriptions which all seem to fall short. The masks are rarely removed, for the safety of others and because the pattern on the mask is the unpronounceable true name of the neria, giving it identity. Given this seemingly eldritch nature, and the worshiping habits of their ancient brothers the hadal neria, it would bring into question exactly what kind of society the primal oceanic neria had.

In any case, the cetacea are passive and only interfere when evil enters the sea, or when the stars are right. They oppose the hadal and it seems they wake and move specifically to prevent the rise of their abyssal brothers from the trenches. If these wars are carried out away from human eyes and a few hadal still surface, how many of their kind have been stopped at the trenches?

Cetacea neria speak in low, long, booming voices and take a great deal of time to think or say anything. They are not dim, simply thoughtful, and not prone to sudden action. They prefer to remain unnoticed, seemingly trying to purposefully fade from the world.

A cetacea neria speaks Common, Giant, and Aquan, and one more ancient tongues with their high intelligence. They are the largest of the neria at a titanic 50 ft tall "standing" (100 ft from head to tail) and weighing 380,000 lbs.

A hostile cetacea is a dangerous being, for it is simply so large and its blows so powerful little can stand against it. Worse, its spell-like abilities allow it to change the battlefield in its favor. Typically any attack is planned; starting with changing the weather, the assault of friendly giants, mer-creatures, and sea animals, followed by the cetacea raining javelins from afar, and crushing anything which comes near with overwhelming force.

Rarer than cetaceas are the cetasea neria worldspeakers, powerful druids which are so rare their are usually only one per major ocean. They act as avatars of nature and protectors of the world. The cetacea neria is able to ignore the alignment restrictions of druids. They seem to be beyond its limits. Worldspeakers usually use their wildshape for utility purposes, sometimes even exploring nearby land as a seagull.

Bellow (Su): A cetacea neria can release a powerful bellowing voice, a shockwave from their many many lungs. It is a breath weapon, which has 3 different methods of attack.

The first breath weapon is a cone of destructive harmonics which deal 1d4 points of sonic damage per HD in a 60 ft cone, with a Fortitude save for half. Those who fail the save are also deafened for 10 minutes, and the sound itself can be heard for miles.

The second breath weapon is a cone of water in a shockwave. The cetacea must first inhale a mouthful of water as a move action (or a mouthful of air if underwater, either surfacing or drawing from its reserves) before using this form of the breath weapon. It deals half the damage of the sonic breath weapon, but those who fail the save are knocked prone and are blinded for 1 round. Fires and fire subtype creatures take double damage, and any open flames are automatically quenched, and magical fires are dispelled.

Regardless of the breath weapon used, it takes 1d4 rounds to recharge. The saving throw is Constitution based.

Blindsense (Ex): A cetacea neria have an echolocation which gives them blindsense out to 1000 ft in water, but only 100 ft in air.

Capsize (Ex): Cetacea neria can topple ships up to one size larger than them, causing the ship to sway and possibly tip over. The cetacea neria must make a touch attack at the end of a charge against a seafaring vehicle, and then make a special strength check (1d20 + BAB + Strength) opposed by the Profession (Sailor) check of the vehicle (+ or -4 for each size larger or smaller than Huge). If successful, the ship rocks violently dealing half the cetacea neria's slam damage to all creatures in the vehicle and forcing balance against falling prone and concentration checks equal to the result for creatures on the ship. If you beat the opposed roll by 10 or more, the ship capsizes completely and turns upside down. A capsized ship is completely disabled, and while air trapped under the ship can keep it afloat for a few days or weeks, it is almost impossible to turn right side up. Eventually, capsized ships will sink and slip under the waves.

Deep Breath (Ex): A cetacea neria have unusually large (and multiple) sets of lungs. They can hold their breath for 1 hour per level of Constitution without needing to breath. Because of how their lungs are set, opening their mouth underwater only reduces the amount of air they have by 1 hour each time.

Delayed Fast Healing (Ex): A cetacea neria doesn't regenerate in battle, but rapidly heals when resting. If not in a strenuous activity for 1 minute, the cetacea neria recovers 10% of its hp each round until at full. A hibernating cetacea is always under fast healing.

Fortified Body (Ex): A cetacea neria is so large it almost counts as terrain, and does count as a fortification. Non-siege weapons deal halve damage, and area effects which do not cover a 30 ft square or larger are also halved. The cetacea neria is immune to death from massive damage, death effects, fatigue, exhaustion, energy drain, ability damage, ability drain, mind-affecting effects, polymorphing, petrification, paralysis, and possesses 75% fortification.

Hibernation (Ex): A cetacea neria can drop into a deep slumber over the course of 10 minutes. Doing so causes its body to harden and take on the consistency and appearance of rock, with hardness 8. The cetacea no longer needs to breath, eat, or sleep, and doesn't even age. It could remain like this forever, with only a dim awareness of its surroundings with its blindsense only. Recovering from hibernation takes 1 minute to "defrost", but it can be done in 1d4 rounds but leaves the cetacea fatigued (bypassing its usual immunity) and with 10d6 nonlethal damage from rushing it.

Hidden Spirit (Ex): A cetacea neria is undetectable by most means, and cannot be targeted by any divination effect.

Unmask (Su): A cetacea neria can reveal its face as a standard action, exposing all creatures in 120 ft to its gaze attack. Those that see its face must make a Will save. On a successful save, they cannot continue to look and cannot comprehend what they have seen. On a failed save, a random effect occurs. Roll on the following chart.

A cetacea takes care not to expose its face around allies. Creatures with 8 HD or less are automatically knocked unconscious for 1 hour, no save.

Spells: A cetacea neria worldspeaker casts as an 8th level druid. The saving throws are Wisdom based.

Skills: Cetacea neria has a +8 racial bonus on any Swim check to perform some special action or avoid a hazard. It can always choose to take 10 on a Swim check, even if distracted or endangered. It can use the run action while swimming, provided it swims in a straight line.