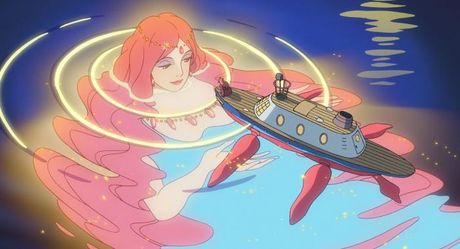 Siren neria are typically shy, but tales tell of those who still fall in love with these giants of the sea.

A beautiful red haired woman is visible laying by the shore, her lower half melding into shining green scales and a fish tail. One would mistake her a mermaid, were she not easily four times your size.

Just as giants exist on land, there are giants of the sea as well. The neria are the giants of mer-kind, and siren neria being one of the most well known ones for resembling mermaids with slightly elfish ears and being one of the most common types seen by the surface. Siren neria are the most human of all neria, often appearing beautiful and wearing clothing of fish scale and pearl. They are usually found by recent wrecks, for they have a curiosity of the surface tempered by a fear of being discovered, and a love of small shining things and metals. Pearls, silver, and gold are the most common materials they prefer, and they make lairs which they keep their loot along coastal shelves.

Siren neria are possessed of a wide array of beautiful vocal ability, and the typically solitary siren neria remain in communication with others thanks to their powerful singing voices and keen hearing. Sailors tell of hearing music on the sea with no apparent source, a hidden siren neria buried just beneath the waves.

A siren neria speaks Common, Giant, and Aquan, and usually one more language appropriate for the local area. They are about 18 ft tall "standing" (36 ft from head to tail) and weighing 20,000 lbs.

Siren neria are typically defensive, fighting to disable the opponent and then fleeing when they can get away. They usually have a good idea of the surrounding environment and will lead their opponents into terrain dangerous for them, running ships aground and tearing holes in the hull to strand them. A few siren neria who learn of the riches that ships can carry become violent, purposefully hunting them and causing shipwrecks so they may loot them and bring the treasure back to their lairs.

Capsize (Ex): Siren neria can topple ships up to one size larger than them, causing the ship to sway and possibly tip over. The siren neria must make a touch attack at the end of a charge against a seafaring vehicle, and then make a special strength check (1d20 + BAB + Strength) opposed by the Profession (Sailor) check of the vehicle (+ or -4 for each size larger or smaller than Huge). If successful, the ship rocks violently dealing half the siren neria's slam damage to all creatures in the vehicle and forcing balance against falling prone and concentration checks equal to the result for creatures on the ship. If you beat the opposed roll by 10 or more, the ship capsizes completely and turns upside down. A capsized ship is completely disabled, and while air trapped under the ship can keep it afloat for a few days or weeks, it is almost impossible to turn right side up. Eventually, capsized ships will sink and slip under the waves.

Sing (Su): Siren neria have powerful voices which can be heard for miles. They have the fascinate ability of a bard of their level. If they gain actual levels in bard, they count their racial HD as bard levels for the purpose of bardic music abiliies.

Spells: Siren neria rhapsode cast spells as 8th level bards. The save DCs are Charisma based.

Skills: Siren neria has a +8 racial bonus on any Swim check to perform some special action or avoid a hazard. It can always choose to take 10 on a Swim check, even if distracted or endangered. It can use the run action while swimming, provided it swims in a straight line.