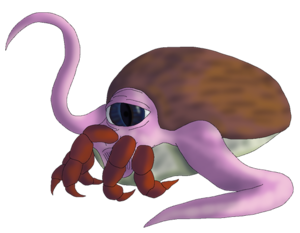 Bizarre brains in a semi-metallic shell...

Bioweapons constructed by Daeijilund in times past, these "think tanks" are master tacticians.

Octimus are not a natural race. It it said they spawn from the world of Daeijilund, sister planet to Eijilund, during a great war between the two worlds. During this war the daeijilund wizards constructed an artificial creature for the purpose of tactics and combat. The result was the octimu, a one eyed horror which looks more aberration than anything forged. Indeed, barely any part of the octimu is inorganic, it is largely an organic construct.

Due to this upbringing, octimus have a troubled personality. They tend to think everything in the form of plans and schemes, even things as simple as doing morning errands. In addition they are used to having people below them to command, and so many an octimu comes off as demanding and haughty. They're love for schemes were actually the original reason for their production being halted, for proud octimus, sure they could run the war better, soon turned on their masters to further their own goals. Nowadays octimus are a dying race unable to produce more, and often reviled. Some have hidden away in idealistic Eijilund, either plotting revolution or seeking sanctuary from Daeijilund. Others remain in service quiet and loyal. And some fled to the far corners of the universe, ending up in strange places...

Octimus are nearly all neural matter, a massive brain with a single beholder-like eye, with five insect legs in front where a mouth should be, all encased in a hard semi-metallic shell. They seem almost barnacle-like, and their only form of manipulating things are two wiggly tentacles that extend from the sides of their head. The flat bottom of the shell is actually riddled with tiny pores that exude a super-slippery and fast-evaporating slime, allowing them to crawl along with their five forward legs or their tentacles. When in danger an octimu pulls its head in, using the thick muscle membrane that connects shell to gooey center as a covering to protect the eye and brain.

While octimus do not possess mouths, they do have vocal organs somewhere within their shell, and more than one apparently. Their voices warble with a chorus of deep echos, which is somewhat unsettling.

Octimus are a solitary lot, rarely getting along with others beyond business, and certainly not among themselves, who they see as rivals. With no need or ability to reproduce, they do not associate among themselves. On the subject of the resident plushies of Eijilund they are torn, some still viewing them as lifelong enemies, others finding them curious minions, and others still disturbed by their unpredictable natures. In all cases, they are more often than not socially stunted.

With a perchance of planning and loyalty, octimus are generally lawful, with many of them trained to be lawful evil. As time passes though the alignments vary more and more often.

Born from Daeijilund, hidden in Eijilund, they are found in any land solitary enough where they will not be disturbed or hunted as freaks. They may develop or adopt a small area of generally monstrous populations.

Religion is a foreign concept to beings created, but as time passes some have turned philosophical. Out of them some find comfort in the concept of a god, but any god they worship is adopted from others, they possess no octimu god of their own.

Octimu speak Common, needing to communicate with other beings. Because of their multiple vocal organs they may learn and speak Aboleth perfectly.

The octimu were originally named with barcodes, and thus devoid of any personal names. Only nicknames which have stuck could be called "names" of any sort.