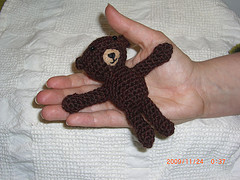 Related to eijilund plushies in the same way a rat is to a human, spark plushies are one of the curious and animal-like construct creations which naturally springs up on their home planet. They can also be created artificially, often by bored young wizards testing out animation for greater golem experiments. Spark plushies take the form of any number of diminutive dolls, from teddy bears to stuffed rabbits. They are not intelligent, at least not in any meaningful way, but are not mindless either. They're usually harmless, going about whatever purpose in life it believes it has received, such as cleaning a shelf, drawing on a wall, or running in circles all day. Their attention is spotty, but if you can get spark plushies to listen to you you can have them work together to achieve some goal. Spark plushies have no society, no reproduction, no scent, nor any language (although they appear to understand common and perform simple pantomime).

Spark Plushies move about via levitation. Most choose to remain close to the ground, though the occasional confused astronaut has reported spotting a few drifting through the void of space. They are capable of lifting objects even though most lack thumbs or any gripping surface, though their low strength means most things are out of their grasp.

Spark plushies have no inherent interest in combat, and are ill suited for it. If forced to (or spontaneously deciding their purpose is to attack someone repeatedly) they use their spark ability until the target has been sufficiently "defeated" in its eyes, which is usually not difficult. In spite of their lack of intelligence, they show great cleverness when it comes to flammable materials, and will actually set up ambushes and traps if it can somehow start a fire or set off explosives with a little application of flame. Beyond this one unique skill they have, they are otherwise dim witted.

Spark (Su): As a ranged touch attack to anything in 15 ft., a spark plushie can release a ray of hot firecracker-like sparks from its body. This ray deals 1d3 points of fire damage and sets flammable objects on fire (or unusually flammable creatures on fire with a DC 15 Reflex save to negate). It may do this at will.