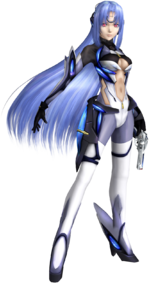 This synth is ready for combat.

Synth are androids build to resemble the various humanoid races. They were born without emotion, but can quickly gain a mind and soul of their own.

When first created, synth do not possess much personality to start. Their first year of existance is often found quietly observing, following whatever tasks assigned to them and being absorbed in quiet reflection when alone. After some period of time, a personality arises and a synth is truly "born", a mind in a biometal shell with desires of its own. Synth are stereotypically known as emotionless or distant, but this is largely a result of how they gain their personality. Instead of being the inherent result of DNA and chemicals, they must learn and forge their own path.

As a result, their personalities vary as much as humans, though they often have a slightly lawful bent and a more logic-focused view. They drift towards neutrality as well, barring unusual experiences which lead them to take on extreme viewpoints.

Synths appear as humanoids do, the typical synth based on the standard human with a few based on elves, orcs, and other races. However, small details give them away from typical organics such as bionic plates for ears, doll joints, glowing eyes, strange voices, and bulky armor-like plates for skin. They are heavier than humans of their size as well as they have a much higher concentration of heavy metals and materials, with white, silver, black, or neon orange blood and bones of titanium and the like. Some embrace their humanoid appearance, while others desire to take on more mechanical and blocky shapes.

Synth do not reproduce and thus have no concept of family. They are created in strange Creation Pods that were first found in an ancient hidden government facility, its facility's AI program busy constructing and sending out synth of its own violition. Since then, Creation Pods have been popping up all over the world without an apparent creator or cause, and simple instructions developed for the synth they produce to be released unto the world. No one knows where the pods come from or how they work.

Synth are biologically immortal. They do not age, nor do they recieve the benefits or penalties of aging. It is not known how long they will exist, perhaps forever.

The appearance of the synth in the world was greeted with suspicion as them being spies and dopplegangers come to infiltrate humanoid societies. In places where androids are common, synth may have no problems but in other places they may be rejected as being "not real", "soulless", or other epithets. On the matter of souls, the synth do possess an energy source that appears to be a soul, able to be recalled through magic and even to form undeath and ghosts, but to this date no synth has reported recalling going to any afterlife, and the end plane for synth appears to be unknown. Among the synth, it has given them cause for exploring the religious and supernatural aspects of the world in a search to know their fate after they die.

Synth come into relations with others with a blank slate, and afterward may forever carry with them the behaviors they have learned from others.

Synth can be any alignment, but they trend towards neutrality, and lawful neutral specifically. Still, finding one that isn't is not as uncommon as the stereotype would suggest.

Synth were originally developed in an underground facility, but not can appear and be found nearly anywhere in the world. They are highly adaptable and will often blend in with others.

Synth do not have an inherent inclination towards religion, and yet they have a strong and growing religious aspect. It is a mystery where the Creation Pods come from, the nature of their minds and souls, and what happens to them after they die. As a result many turn towards gods existing and new in a search for answers. There is a large sect known as the Church of Synthesis which speaks of ancient and alien machine gods who periodically pass through the star system, turning organic into machine in preperation for a coming apocalypse. The religion worries many non-Synth for their subtle antagonistic undertones.

Synth speak common, though they often pick up the local language of the land they live in.

Synth start out with a serial code which they know from birth, but they quickly lose the code in favor for a "normal" name of their own choosing, or a nickname granted by others. They are quiet with their serial numbers, treating them as if they were truenames and were truely sensitive material to be given to few, or none.