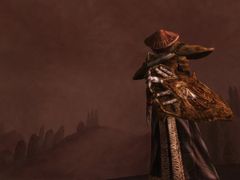 Within the rusty red mists, a take warrior stands in meditative silence.

The take (pronounced "tack-ki") are a race of fungus based humanoids who have the appearance of wearing broad brimmed hats, but in truth are simply the heads of this alien honor-bound warriors and priests. Hailing from a distant star, they took to the skies at the wishes of their ancient philosophers to answer the 144,000 ineffable mysteries of the universe. It is said when all questions have been asked and all the answers found, God would be born into the world and an age of eternal peace will begin.

The take were born into a world of cycles. The sun rose and fell. The earth was still, and then shook with great force. The sky grew light and dark. Empires rose, and empires fell. With these cycles and throw growing civilization philosophers of great renown rose and supposed that the purpose of life was to find an end to the cycles, to find stability and order. Civilization was a temporary but beneficial order, but one day God itself would manifest and true order would be established. Until then, the take were to mantle the cause of order and peace for the benefit of all.

With a long history of these teachings, and a subtle near-genetic memory which their kind passes on in replication, it was no surprise that a lawful streak would be found within them. They are a species which promotes the concepts of tradition, honor, respect, and discipline. They take tasks from cooking to gardening to war as if they were art forms to be studied and perfected. They strive for growth, and when they struggle and fail they believe they will succeed. Even if it takes 1000 lifetimes.

The form of the take would suggest that of a human, and when garbed in their often flowing robes they would seem to be humans wearing large brimmed conical hats. In truth these are mushroom caps, and actually are their faces. A thin band of ribbon-like eyes lay along the hard cap's edge, and under it gills which breath gently on their own. They do possess a more human mouth just below upon the shaft, which extends into the humanoid form which seems like a man formed of unshaped clay, ever so angular and blocky at places. Their arms and feet in particular seem to lose the most detail, though their four fingered hands still manage with most tasks.

Take are omnivores and eat a great many things, including food and material which would be considered rotten and spoiled. In spite of their wide digestive abilities they nevertheless have taken cooking into an art form and are the creators of several strange and sometimes dangerous exotic cuisines.

Take reproduce via mixing spores, which eventually grow into large cyst-like eggs and young take. They can also reproduce asexually, but this is considered an act of desperation. This method is also key in their ability to respawn from death, which takes no small amount of willpower on their part to retain their personality through the long growing process.

Take are on average slightly taller than humans, but surprisingly lightweight for their size. They come in various colors, typically earth tones.

Not all understand the methods of the take, and the take do try and understand the more chaotic races and their methods, even if they look with disapproval. Species which maintain law and order gain the most respect from them regardless if it is for good or evil. As a general rule, while most creatures see the forces of good and evil as primary, the take see things in terms of law and chaos. Though law is seen as good, chaos is not always evil, simply different, often dangerous, and rarely required.

They do often find common ground in terms of religion at least. While the gods may not be the same, take society is largely broken into several groups in which priests is one of them. Religion and philosophical debate is one of the highest tasks one can provide, and they provide in spades.

The take's view on the world is a land of law and chaos. Chaos is nature, chaos is the mother, but chaos is also dangerous and uncaring. They thus embrace law, making most lawful of some sort.

The take hail from the humid world of Shii, a verdant land marked with steep cliffs, seismic activity, and raging waterfalls. It is actually a double-planet system with the far less hospitable but mineral rich Amanitin. They prefer caves and forests with heavy overgrowth, and the suns of other worlds are harsh upon their bodies.

The take are adherents to the Church of the Way, worshipers of the mysterious Daoloths. Yet this religion is weaved in with their much older philosophies concerning the universe, and if asked it is this belief which takes priority. Priest-healers known as Curandera are often involved in divinations and ceremonies of fortune, and belief in spirits is commonplace. And yet less commonplace is the belief in gods, or at least in gods meant to be worshiped directly.

The take have learned Common in their travels, but originally speak a dialect of Slyvan which is hard for many to understand. It seems as if it is the functional equivalent of Ye Olde English to many.

While take possess a common name which may be taken from the surrounding culture, it is traditional to name them something in Slyvan as well. These names sound flowery, and the direct translation is a descriptive title such as Carves-The-Shore, or Crying-Steel-Blade. These names also mutate and grow with time, getting longer or changing completely upon a life changing event. To assume a new name is to assume a new outlook and oath and is not taken lightly.