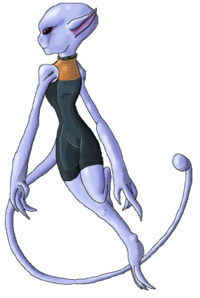 "Inferior beings, scraping at sapience, you are nothing to me."

Powerful psychics from beyond the stars, they hold a powerful racial psychosis at bay.

To a normal man, emotions are powerful but purely mental things generated through chemical reactions which at worst may cause their bodies to become giddy, depressed, removed of pain, or weakened in immune systems. These physiological changes are visible but never fatal. For the uberich however, emotions are a tool powerful enough to manifest as powerful energies able to stitch the body together from grievous harm, to blast apart others as if struck by a missile. Self-aware of their power, and prone to racial emotional instabilities, the precursors to the uberich took it upon themselves to control their wild emotions through strict dogma, discipline, and genetic engineering. Thus the modern uberich came to be, a being of great power through focused emotion, at the expense of their other emotions. By focusing upon only a single aspect they no longer had the threat of their emotional instability keeping them from being able to focus, and their subtle psionic power grew intense. But with the dogma came a need to be strict, be brutal, and be heartless in their training, and the uberichs grew cold of heart.

To the uberich, all other beings are meant to serve them. As cattle are used for feeding the populace, as horses are used to pull heavy loads, so too the other races, humans, orcs, elves, and all. They are psionic masters of their world, as unto small gods, it is natural for them to be on top. In the face of any greater threat, they realize their position, and seek to find a way to topple it, to become number one once more. Needless to say the other races never appreciate this mindset, and so the uberich has few friends outside of his race. At best a being may win the affection of an uberich in the same way a master may see his pet.

The uberich is rather similar to the classic concept of an alien, though rather tall, ranging from the size of a man to nearly 7 feet in height. Their bodies are smooth and rubbery, devoid of all hair, ranging from various blues to gray and even bone white. Their eyes vary wildly in color, and they have very large cat or rat style ears. They are rail thin, and have a long slender tail which fattens into a small ball at the tip. Their whole body is supercharged with psionic energy, leading some to believe that ectoplasm is actually a significant part of what little body mass they have.

Because of the slavemaster mentality of the uberich, uberich rarely get along with other races. Others are either to be ignored for possessing no threat or useful qualities, enslaved, or destroyed and toppled. How the uberich goes about these goals may vary, sometimes the subtle ways have proven best. Still, make no mistake, the uberich are not your friend, even if in the short term an alliance seems profitable for you.

The strength of their power through emotional extremes leads to likewise extreme alignments. However due to the race's vigorous dogma and training, most uberich are lawful evil.

The uberich originally hail from a planet called Itoi, an Earth-like world where the uberich flourished into a technologically and psionically gifted land. However, the planet no longer exists... sometime after the re-engineering of the race there was a uberich of great power named Giegue. After a humiliating defeat, he returned to his world and went into mental training to focus his emotional power, and was entirely too successful. The process became self-perpetuating, the feedback increased exponentially, and Giegue was consumed by his own evil power. The swirling red vortex devoured him, and spread to the rest of the planet. Indeed, it would have continued on forever and destroyed the universe were it not for the intervention of deific forces. As it stands, the planet Itoi has been lost, a swirling red miasma the only remaining sign of it ever existing. All surviving uberich live upon other planets or massive space-borne colony ships.

Religion is unheard of, very nearly banned, and the concept of beings greater than oneself is disturbing. To them, gods are merely mortals who have managed to achieve power, and thus one of many beings to be eventually toppled.

The aliens have a Common name, spoken in words which can be practically anything, but also have a mental signature in Itoich. It is unfathomable to other races and cannot be spoken, even by other telepaths.